By Daniela Germano, The Canadian Press 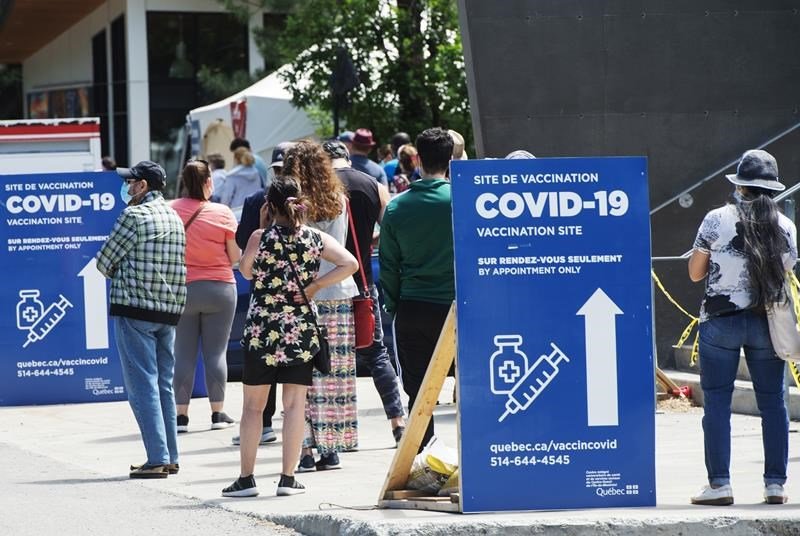 People line up to get their COVID-19 vaccine at a vaccination centre, Thursday, June 10, 2021 in Montreal. (THE CANADIAN PRESS/Ryan Remiorz)

Some provinces hit hard by the third wave of the COVID-19 pandemic have moved toward shedding more public health restrictions, but a national group is calling for those governments to slow their plans.

Zero COVID Canada sent a letter Thursday to the premiers of British Columbia, Alberta, Saskatchewan, Manitoba, Ontario and Quebec “to express our deepest concerns regarding the reopening plans.”

“As more and more evidence comes in, it appears that a single dose of the vaccine — including Pfizer — is only about 30 per cent effective against the Delta variant, which is ravaging India and the U.K. right now,” the letter says.

“Each new variant has the potential to evade vaccination efforts, and we need to protect our efforts to date.”

The group is made up of researchers, physicians, engineers, activists, lawyers, educators, and concerned citizens.

It noted that the variant first identified in India has already caused multiple outbreaks in Canada, including at the Foothills Medical Centre in Calgary, and is behind case spikes in Manitoba and in Peel Region outside Toronto.

“In these circumstances, reopening too soon will waste much of the hard work we’ve put in to stop the spread and cause a fourth wave,” said the letter. “If we make the last bit of effort, the current downgrading wave could be the last.”

In Alberta, more public health restrictions were eased Thursday in the second phase of the province’s reopening plan, which allows up to 20 people at outdoor gatherings, weddings and funeral services, but still bans indoor gatherings.

It also allows indoor recreation, entertainment and other settings to open at one-third of fire code occupancy. Gyms and fitness studios can open for solo and drop-in activities, as well as for indoor fitness classes with proper distancing.

Restaurants can have a maximum of six people per table, indoors or outdoors. Outdoor public gatherings such as concerts and festivals can have up to 150 people.

To reach the second phase, 60 per cent of eligible Albertans had to have at least one shot for a two-week period. As of Thursday, the province was at 67.8 per cent.

Premier Jason Kenney said at the day’s COVID-19 briefing that all restrictions will be lifted when 70 per cent of the population has had one dose, but added that demand for the first shot has been slowing.

“The full opening of the province is in (your) hands, especially those of you who have been maybe a little undecided about getting vaccinated,” he said.

Last week, the Edmonton Zone Medical Staff Association sent a letter to the mayors of Calgary and Edmonton saying the province was moving too quickly. The group asked the mayors to keep masking bylaws in place until at least 70 per cent of their cities’ eligible populations have been fully immunized.

Zero COVID Canada also recommends that provinces keep masking and physical distancing, and to only restore capacity limits indoors when 70 per cent of residents are fully vaccinated.

It asks provinces to prioritize second doses for essential workers and people living in areas of high infection rates, to subsidize N95 masks and to close schools.

Ontario said Thursday that it is speeding up second doses in Delta variant hot spots. Starting Monday, residents in seven designated areas who received their first dose on or before May 9 will be able to book an appointment for a second shot.

The province is to enter the first of its three-stage reopening Friday. That includes limited retail shopping and patio dining. More restrictions are to loosen after 21 days if pandemic indicators improve and more people get vaccinated.

The latest projections in Ontario suggest sharply lower case counts and positivity rates in the immediate future, but concerns remain about the more transmissible Delta variant.

“It will likely be the dominant form of the virus this summer,” said Dr. Adalsteinn Brown, co-chair of the province’s COVID-19 Science Advisory Table. “It is critical to control the spread of this variant.”

“The more of us who get vaccinated, the faster we can regain our freedoms and enjoy what we’ve lost this past year and a half,” said Premier Brian Pallister.

The plan focuses on gatherings, travel, shopping and dining. Restrictions are to lift gradually if vaccination targets set for Canada Day, the August long weekend and Labour Day are met.

“Summer is coming and the vaccines are here,” Pallister said. “It’s time for Manitobans to get their freedoms back and enjoy a summer that they all want and all deserve.”

British Columbia provincial health officer Dr. Bonnie Henry said the province is in a good place and she’s confident about the move forward on Tuesday into step two of a four-step reopening plan.

The change would allow for several more freedoms, including the lifting of recreational travel restrictions within the province and allowing for gatherings of up to 50 people.

“I am optimistic in a way that I have not been for a long time, and it really has to do with how well the vaccines are working, and working over time,” Henry said.

B.C. reported 153 new cases on Thursday and that 72.8 per cent of those 12 and older have received their first dose of a vaccine.