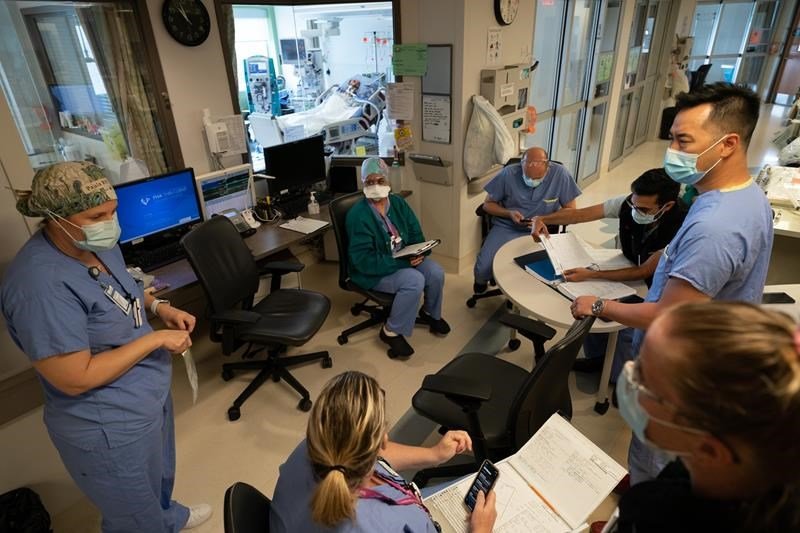 WINNIPEG — Manitoba is facing a “staggering” backlog of surgeries, diagnostic tests and other health-care services because of the COVID-19 pandemic and the drain on staff, the provincial doctors association said Thursday.

An estimated 110,000 procedures have been delayed, leaving patients suffering and deteriorating in many cases, Doctors Manitoba said in a 26-page report.

“We’re seeing patients that are suffering in pain and we’re hearing from physicians that are worried … that they can’t get their patients the answers they need, the diagnosis they need,” said Dr. Kristjan Thompson, the association’s president.

Most elective and non-urgent surgeries have been suspended during all three waves of the pandemic, starting in March of last year, as nurses and other workers were diverted to COVID-related care.

While procedures resumed after the first two waves subsided, the health-care system could not catch up enough due to ongoing staff challenges and new requirements to adopt pandemic precautions, the report said.

With Manitoba still in the pandemic’s third wave, the backlog continues to grow, Thompson said.

The report also said non-urgent surgeries are not the only procedures being cancelled.

“Some physicians have reported concerning cancellations and delays for cardiac and cancer surgeries. For cardiac patients, physicians have identified significant deterioration among patients waiting for heart surgery, including at least two patient deaths on the wait list.”

The report was compiled from several sources, including data from the provincial government, the Canadian Institute For Health Information, a third-party public opinion poll and an internal survey of Doctors Manitoba members.

To address the backlog, the province will need more nurses and other staff, and more physical space in terms of operating rooms and recovery beds, the report said.

The association is calling on the provincial government to commit to a firm date for clearing the backlog, and to develop a plan to do so in conjunction with health-care workers.

The Progressive Conservative government said it has already taken steps to reduce the backlog, such as contracting CancerCare Manitoba to perform additional procedures.

Kelvin Goertzen, the province’s acting health minister, said the government is open to doing more and will review the Doctors Manitoba report.

“Our government strongly believes that open dialogue and constructive solutions are the best way forward,” Goertzen said in a prepared statement.

The Opposition New Democrats said the government has failed to hire enough staff to protect the health-care system during the pandemic.

“It will take years to fix the damage the (Progressive Conservatives) have caused to the health system,” said NDP health critic Uzoma Asagwara.

The pandemic’s third wave showed more signs of abating Thursday as health officials reported 183 new COVID-19 cases and one death. Seven earlier cases were removed due to a data correction, bringing the net increase to 176. It was the fifth consecutive day that the province saw fewer than 200 new cases.

Some 20 COVID-19 patients were still being treated in intensive care units in other provinces in a bid to free up bed space in Manitoba.