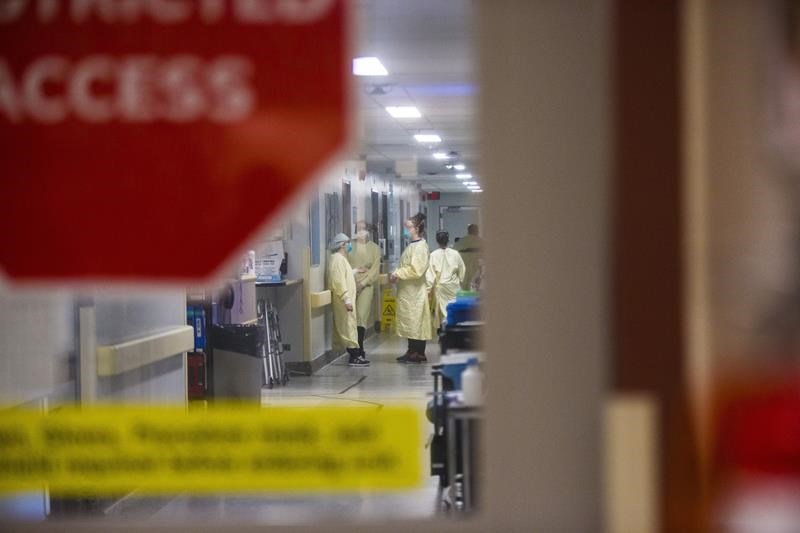 A COVID-19 unit (which used to be an orthopaedic surgery unit) at the Health Sciences Centre in Winnipeg, Tuesday, Dec. 8, 2020. (THE CANADIAN PRESS/Mikaela MacKenzie, POOL)

WINNIPEG — Some Manitoba doctors are urging the provincial government to back off its plan to reopen the economy July 1 until COVID-19 numbers drop much further.

A group of 11 physicians specializing in public health, infectious disease and other areas has written to the Progressive Conservative government. Their letter says the province has yet to factor in the Delta variant, one of the variants first identified in India which has shown to be highly transmissible.

Dr. Dan Roberts, who specializes in critical care, said the province is still seeing more than 100 new cases each day and the rate of people testing positive is above eight per cent.

“It is just completely irrational to propose to ease restrictions with those numbers,” Roberts said.

“Those numbers would have to get substantially better in the next two weeks to even contemplate any kind of easing whatsoever, and the numbers that would be required are probably not achievable in that time frame.”

The government is proposing to raise capacity limits in stores and at public gatherings — and has hinted it might reopen some establishments that have been closed — by July 1 if a number of targets are met, some of which are vague.

The easing will depend partly on a continuing but unspecified drop of new daily infections, hospital admissions and the test-positivity rate. Vaccination targets, which are more firm, must also be met. Seventy per cent of Manitobans aged 12 and up must receive their first dose and 25 per cent must receive their second.

The province’s deputy chief public health officer said the reopening plan will be finalized next week, and will likely see only minor changes to current restrictions.

“There’s lots of information to review … to come to those decisions.”

The Delta variant will be factored into next week’s announcement, Atwal added.

Kelvin Goertzen, the province’s acting health minister, said the doctors’ input will be considered alongside other feedback.

“We know there are a great variety of opinions on how to safely reopen, even within the medical community,” Goertzen said in a statement.

“These doctors represent important voices and those voices are welcome at the decision-making table, as are others. All of this input is heard by our public health leaders, who examine all the evidence very carefully before bringing forward recommendations to government.”

That third-wave peak prompted the province to tighten public health orders. It also led the province to ship some COVID-19 patients to intensive care units in other provinces to free up bed space. Twenty patients remained out of province Friday.