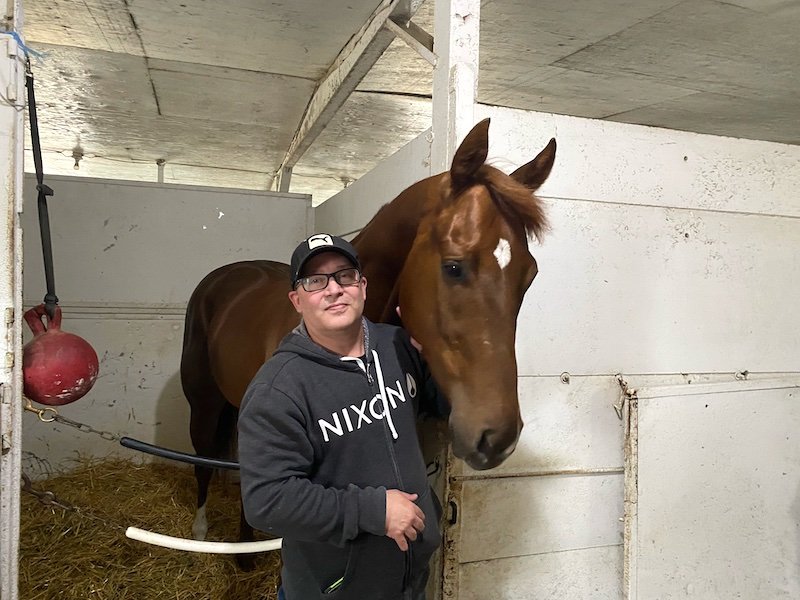 If you wander over to the backstretch at Assiniboia Downs, early on just about any morning, you will likely find one of the Magnificent Seven.

Tim Gardiner is a 58-year-old jockey agent who has one client – the leading rider at the track, Jorge Carreno. However, he used to be one of the greatest jockeys in ASD history. As track historian Bob Gates, has said, “Gardiner is one of the Magnificent Seven with Ken Hendricks, Tom Adkins, Frank Licata, Jacques DesAutels, Rohan Singh and Larry Bird.

But Gardiner is a different man today. He’s a survivor of major heart surgery, has formed friendships with some of the most powerful people in North American racing and he is also an unapologetic promoter of Winnipeg’s little track on the prairie.

“I don’t care what anybody says about Assiniboia Downs, it’s been gold for me,” said Gardiner, who was hanging with his long-time friend Derek Corbel when we spoke. “It opened up a lot of avenues for me. The place has been good to me and if anybody says a negative thing about it, I will quickly set them straight. It’s a great little track.”

These days, a man who is not only a highly-decorated champion jockey, but also considered a gifted judge of horse flesh, has only one person other than himself and his family to worry about. That’s the man he represents, leading rider Jorge Carreno.

This past week, Carreno won six more races – that’s 19 in the last nine racing days – and now has 24 wins, 19 seconds and eight thirds in 79 starts. He’s won $268,090 for his owners. Stanley Chadee Jr. is second in the standings, nine wins back of Carreno.

“I got a call this spring from Mike Pierce, a former agent here who is now training at Canterbury, and he called Jorge, ‘a very serious rider,’” the 58-year-old Gardiner said. “But he had some question marks with being hurt and he’d had a long layoff. All we did was look at his numbers and I watched some videos and I mean, Wow! This guy was a stable rider for Diodoro, that’s a huge accomplishment. No other rider here is close to saying that. There are always question marks when you get hurt. He’d been on a couch for nine months. But since he arrived, he’s done every single thing I’ve asked. Guys with credentials like his, often don’t want to do the work that small-track jockeys need to do. This guy is not a problem. He’ll do whatever it takes. He’s also honest with himself. If he blows a race, he admits he blew it. He doesn’t blame anybody or anything else. He takes responsibility.

“I was successful because I worked hard and was always the guy who wanted to win the most. Jorge is just like that. Everybody is fighting for whatever they can get, but Jorge is a hard-worker and everybody likes him.”

The same thing could have been said back in the day about Gardiner. He grew up in the tiny municipality of McGregor, Ont., just south of Windsor, and wound up in Winnipeg as a very young man at the end of the 1980s.

“Growing up in Ontario, there was a horse farm in Windsor,” he recalled. “It was a ranch where they had ponies. We constructed home-made bridles out of tape and leather and we’d go out to the ranch and throw them around these horses in the winter and just ride ‘em. Little did we know, they were wild maniacs, but I always liked it.

“I was a pretty good athlete, although I was really small at the time, and I liked the speed for the horses. I worked at a number of tracks from Ontario to Ohio to Manitoba to Florida. Then I got involved working two-year-old sales and was quite successful and I had a chance to work for great people. Because of meeting people that you see on TV all the time, trainers like Todd Pletcher and Dale Romans, at these sales, I got to know a lot of pretty important people in racing. I have a great relationship with Bob Baffert, because I sold him Silver Charm, his first Derby winner in 1997.

“When Alyssa Selman was paralyzed here, I texted Bob and said to him, ‘I need the halter from American Pharoah to use as a fundraiser for Alyssa.’ He didn’t hesitate. He even did a video of himself taking the halter off American Pharoah when he sent it to us, so everyone knew it was him. To me, Baffert is a pretty special guy.”

Gardiner got to Winnipeg via Cleveland where he was the leading rider for a time in 1989. When he arrived here, he had tremendous early success.

“I was a kid who didn’t really understand the business,” he said. “Mike Rowland, who was a really, really good rider, said to me why don’t you come here to Winnipeg? I think you’d be really successful. Right away, I rode for a lot of successful trainers, but it was Red Johnson who put me on a ton of winners. I had really big trainers who supported me from Day 1. It was all because I worked hard. I would get to the backstretch at 5 o’clock every morning and gallop 14-15 horses every day. I knew I had to do it if I wanted to be successful.”

In addition to his riding skills, Gardiner is also a fine judge of horses. In 1996, Gardiner picked out Silver Charm for C.J. “Shorty” Gray and his partners, Cam Ziprick and Dr. Lee, while working for McKathan Brothers in Florida. The three Downs’ partners only owned the grey colt for three weeks, before selling him for a tidy profit. Silver Charm went on to win to the Kentucky Derby and Preakness for trainer Bob Baffert and his connections in 1997.

When he retired from riding in 2009, Gardiner got into the agent’s business.

“I thought I’d be good at it but I learned quickly, it’s a lot harder than you think,” Gardiner said. “You have to have a product. When I started out, I got lucky and had a couple of great riders.
“I have only one now, just Jorge, and I like it with one. I had major heart surgery in 2018, a quintuple by-pass, which is no fun, so I don’t like all the confrontation you often get dealing with some owners and trainers. If someone wants to fight with me, I’ll walk away. I can’t take that aggravation anymore.”

Despite the occasional bit of aggravation, he’s enjoying his season with Jorge. It gives him a chance to pass along what he learned from a successful career in the saddle.

“Every jockey title you win is hard-earned,” Gardiner said. “Nobody is ever going to give you anything in this business, so you have to work hard, be a good person and be confident every race you ride.

“I always believed that when you go out there, you have your pants bleached. You walk around like you’re the man. You think of everyone else out there as just an exercise rider. Get on the horse confident that you’re the best rider and you’re going to win the race. That’s how I build Jorge’s confidence. So far, things are working.”