By Pierre Saint-Arnaud, The Canadian Press 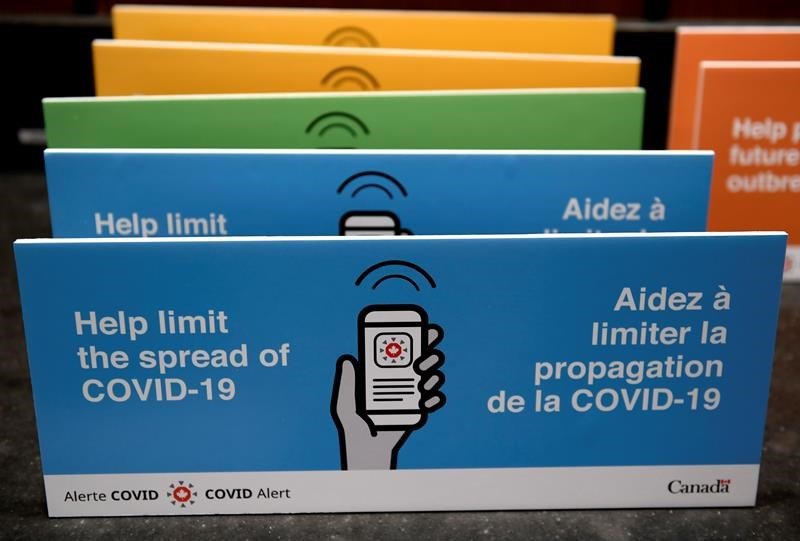 Podium placards promoting the COVID Alert app are seen on a table on Parliament Hill in Ottawa, on July 31, 2020. (THE CANADIAN PRESS/Justin Tang)

MONTREAL — The federal government spent $20 million on a smartphone application designed to alert users to possible COVID-19 exposures, and new data obtained by The Canadian Press shows the results didn’t live up to expectations.

Ottawa’s COVID Alert app, introduced late last year in several provinces, uses Bluetooth to detect proximity to others who have installed the app on their mobile devices, and it notifies users when they’ve been in close contact with a person who has tested positive for COVID-19.

The data indicates about 6.6 million people downloaded the app, representing about one in five Canadians. There are more than 30 million cellphone users across the country. The relatively low number of Canadians who have used the app has led to disappointing results, according to Dr. Esli Osmanlliu of the McGill University Health Centre.

“We have to admit that, in retrospect, it did not meet expectations at all — far from it,” Osmanlliu, an expert in digital health-care initiatives, said in a recent interview.

The documents reviewed by The Canadian Press revealed a major part of the app budget— $15.9 million — went into promotion and advertising. Another $3.5 million was invested in the development and maintenance of the app.

Despite the fact the app was launched in September 2020, the government has only compiled data since February. Between Feb. 25 and May 31, about 70,000 exposure notifications had been issued through the application. It’s unclear, however, if the data includes multiple notifications for a single person, such as a health-care worker who is regularly exposed to COVID-19.

The data also shows that up to July 1, Ottawa had distributed 34,000 “one-time keys”, which are codes given to people diagnosed with COVID-19 that they use to confirm their test result on the app so it can notify other users who may be at risk.

Osmanlliu said the low rate of participation — both in terms of the number of downloads and the number of people self-reporting positive COVID-19 tests — has hindered the app’s effectiveness. The data indicates clearly, he said, that COVID Alert isn’t playing a big part in slowing down the virus.

“Not only we are not sure the app works, but the figures for the delivery of a one-time key are very low compared to the total of people who had COVID-19,” Osmanlliu said. “As for the alerts, we see the disconnection between the number of people who downloaded and the number of alerts.”

Ottawa, however, has never referred to COVID Alert as an essential resource. In its responses to The Canadian Press and in other public statements, Health Canada repeatedly said the app is “just one of the many tools available to Canadians to help slow the spread of COVID-19.”

Osmanlliu said the app may be potentially more useful on a smaller scale and in situations that are better defined. For instance, he said, the application may have uses in long-term care homes, schools or among essential workers.