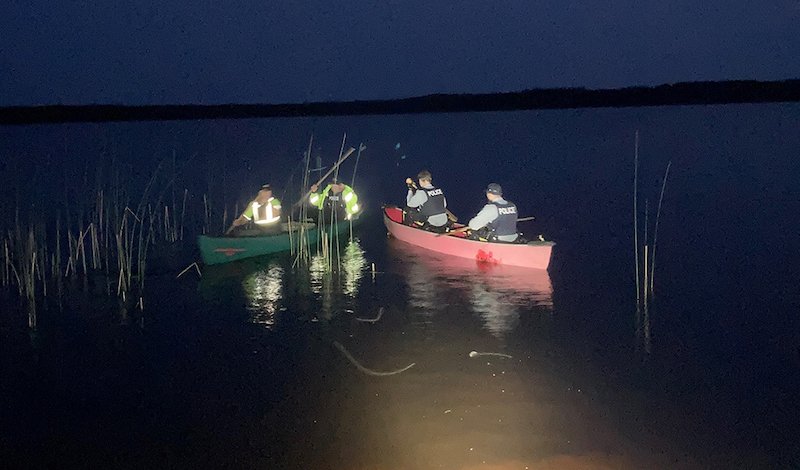 RCMP officers take part in a rescue operation in a handout photo on July 10, 2021. (RCMP HANDOUT)

THOMPSON, Man. — RCMP have rescued two stranded boaters in northern Manitoba in what they say turned out to be a very Canadian rescue.

The Thompson detachment received a report on July 10 that the boaters were stranded near an unnamed lake south of the northern city.

Officers tried to reach the boaters using a snowmobile trail, but they had to turn back due to swampy terrain and dead-end water.

They were able to find the two Thompson men, who are both in their 50s, with the help of conservation officers and park patrol from Paint Lake Provincial Park.

But not before trekking over a beaver dam, hiking three kilometres through the bush, and borrowing canoes from some locals.

They then paddled a kilometre to get to the boaters and bring them back without any injuries.

“You can’t get more Canadian than this rescue, with beaver dams, canoes, and Mounties,” Insp. Chris Hastie said in a news release Tuesday.

“In all seriousness, though, this rescue highlights the unique demands placed on officers who work in Manitoba’s north. I am very glad we were able to get there and assist the stranded boaters and that everyone got home safely.”