Home » Sports » Under the Circumstances, It’s Already Been a Solid Year at Assiniboia Downs

Under the Circumstances, It’s Already Been a Solid Year at Assiniboia Downs 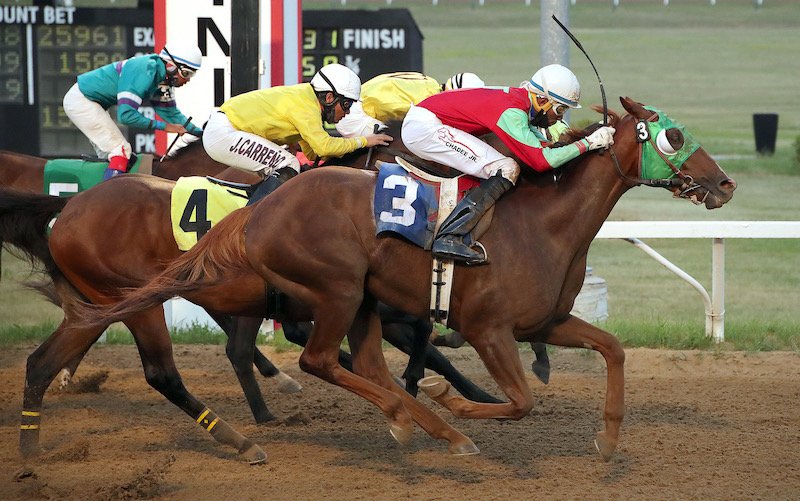 Flash of Glory wins the incredible finish in the Manitoba Derby Trial at Assiniboia Downs on July 12, 2021. (JASON HALSTEAD PHOTO)

After a week of encouraging announcements, the local race track really has some things to cheer about.

1. On Monday night, Kentucky-bred Flash of Glory, trained by Michael Nault and ridden by Stanley Chadee Jr., won the $35,000 Manitoba Derby Trial in a race in which any of the first four horses across the line could have won.
2. The Manitoba government announced that the Downs could now open to a limited number of spectators from 10 a.m. to midnight.
3. On Saturday, the Downs could fire up 82 VLTs, up from a handful on Friday.
4. The leading jockey from 2020, Antonio Whitehall, and one of his biggest challengers, Rafael Zenteno Jr., could now commute freely between Century Mile in Edmonton and Assiniboia Downs in Winnipeg, adding two experienced and talented jockeys to the local colony.

It was a good week and according to ASD CEO Darren Dunn, there could be more good news this coming week.

“We’re still waiting on clarity of what we might be able to do regarding additional spectators,” said Dunn. “We submitted a plan last week and have no official word back on that yet. We want fans back for Manitoba Derby Day (Monday, Aug. 2), within capacity limits and restrictions, of course. And obviously, I’m referring only to those who would be double-dose vaccinated plus 14 days. I’m leaning on that and we’re optimistic we can something achieved there.

“But we are very pleased that we can now open from 10 a.m. until 12 midnight. It was hard on race days to ask people to leave at 10 p.m. with only five races completed on a seven-race card. People have been very understanding and patient but that’s still a tough ask. Being open until midnight is a very big deal. And being able to turn on 82 VLTs is a significant revenue stream and that’s a big deal, a nice step forward and very positive. We are very pleased with a number of announcements this week.”

The Downs has reached the midway point of the 2021 racing season and while the wagering numbers are nowhere near what they were in 2020 — when everyone was locked down and wagering on horses on-line was about all there was to do last summer – they are still better than they’ve been in recent memory.

“We’re very pleased with where we’re at,” Dunn said. “Wagering is at a number we can make work. Wagering is over $600,000 a day on average which is most assuredly down from last year. And we had that expectation. It’s down from more than a million dollars a day last year, but last year was an anomaly and we knew it. We didn’t have expectations of hitting those numbers again so we’re very pleased with $600,000.

“To be honest with you, in the past if we got $500,000 on a Manitoba Derby Day pre-pandemic there was a lot of fist pumping and celebration. To do $600,000 a day at Assiniboia Downs is a great achievement still. To get to mid-season and have a significant enough sample size to say this is a very strong, solid number that we can forecast for the rest of the year is a great accomplishment in a lot of ways.”

Still, while the Downs is surviving what Dunn calls COVID 2.0, he’s still not satisfied with everything that’s happened in 2021.

“No. I’m not satisfied with my jockey colony,” he said bluntly. “I’m not pleased with the number I have and the skill level is not what our customers are used to. Now, I don’t mean to be too critical with my comments here. I respect all jockeys who put a leg up on a thoroughbred, but there is work to be done there and I’m not sure we’re going to be able to accomplish much more this year. Getting Antonio Whitehall back and Rafael Zenteno Jr. as we did this week, are two huge additions to that jockey colony and immediately elevates the skill set and everybody’s game in there. Those were very helpful additions. I’m hopeful I can get a few riders in before the meet is over, but that’s tricky.”

While pleased with his average, per race field size, Dunn knows that border restrictions limited the number of horses in the backstretch this season.

“We’re pleased with average field size. It’s meeting expectations,” Dunn said. “But we’re never satisfied out here. We’re always looking to achieve more and up our game. When you put our numbers up against the border restrictions with the U.S., it really cost us more than 100 horses.

“Still, I’m very pleased to say that what we’ve been able to put on the table has been well-received by our customers and it’s helped achieve some very strong numbers. We’re strong, we’re stable, we’re finding a path through COVID 2.0 and there is a reasonable finish line in sight. So far, so good.”

And, to be fair, the future of this season bodes well. Fact is, despite his own critical view of things, ASD had been a model for how public sporting facilities can handle a pandemic.

“We’ve been able to keep COVID outside of the borders of Assiniboia Downs very successfully so far and we have a little way to go now,” Dunn said.

“The optimism of having the Manitoba Derby right around the corner is exciting and restoring the $100,000 purse level is something we’re very pleased we’ve been able to do. I don’t have a good understanding yet as to how that race will shape up, but we’ve had a lot of phone calls and a lot of people knocking on the door with interest but it’s hard to separate who is genuinely interested and who is kicking tires. Hopefully, that $100,000 number will create a special race for our pinnacle event of the race season.”

Dunn was pleased with the finish of the Derby Trial. It could be said that Flash of Glory is the local Derby favourite, but he barely beat Henry Witt Jr.’s Witt’s Taquito trained by Jerry Gourneau and Purple Rose Ranch’s Warriors Hero trained by Steven Gaskin. There is really no spectacular local horse to scare any invaders away. And considering that trainer Lisa Pruitt says her super filly Melisandre will likely run in the Manitoba Oaks and not the Derby, suggests that someone from Century Mile, Woodbine or Canterbury might ship in some real talent for the August 2 race.

“The one thing that came out of that Derby Trial is a sense that it’s wide open and that bodes well for the Derby,” said Dunn. “It you have an absolute hammer, it tends to scare away competitors. There is no indication that there is a stand-out right now. It was an incredible finish at the wire in the Trial. You could throw a blanket over the top three or four horses. That should help attract interest. It’s anybody’s race and there is $100,000 on the line. That should attract some interest.”

Racing continues at the Downs on Monday, Tuesday and Wednesday nights this week. First post each night is 7:30 p.m. On Wednesday night it’s the $35,000 Escape Clause Stakes for three-year-old and upward, fillies and mares. It should be an exceptional race featuring LaVerendrye Stakes and Canada Day Stakes winner Miss Imperial.