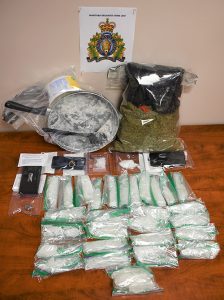 Drugs seized by RCMP from a Winnipeg home as part of an investigation on July 16, 2021. (RCMP HANDOUT)

Two people have been charged following the seizure of drugs from a Winnipeg home last week.

Manitoba RCMP executed a search warrant on July 16, where they seized just over 1 kg of methamphetamine, approximately 1 kg of illicit cannabis and a small amount of crack cocaine.

Nelson Berard, 43, of Portage la Prairie, and Ashley Asham, 31, of Winnipeg, have been charged with possession of a controlled substance for the purpose of trafficking.

They were both released on conditions and are scheduled to appear in Winnipeg provincial court on September 16, 2021.