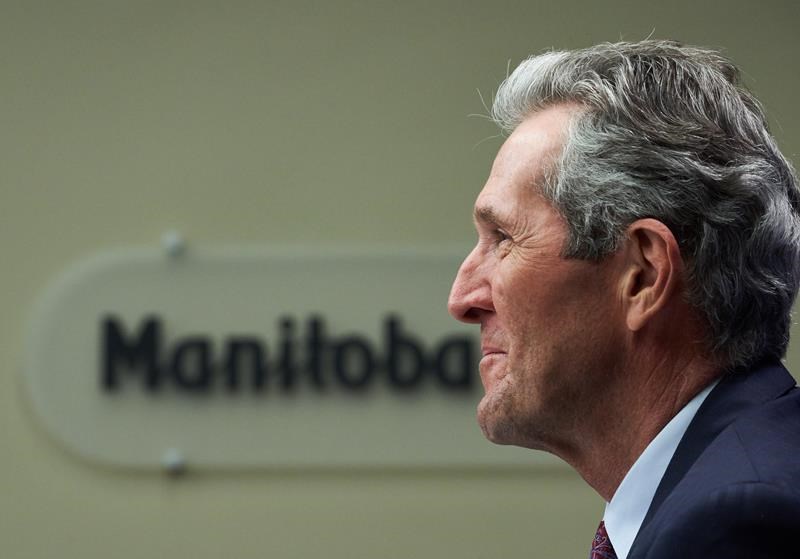 Manitoba Premier Brian Pallister speaks at a news conference after the 2021 budget was delivered at the Manitoba Legislative Building in Winnipeg on Wednesday, April 7, 2021. (THE CANADIAN PRESS/David Lipnowski)

WINNIPEG — A Manitoba cabinet minister, saying she cannot support remarks if they add to the hurt of traumatized people, has distanced herself slightly from Premier Brian Pallister’s comments on Canadian history.

Conservation and Climate Minister Sarah Guillemard was asked Friday for her reaction to Pallister’s remarks earlier this month that have drawn widespread condemnation from Indigenous leaders.

“We are not here to add any hurt to traumatized people, and I don’t believe that anyone in their hearts intend(s) to do so, but again, we all need to listen, we all need to learn, and we need to grow together,” Guillemard said.

Guillemard made similar comments on social media last week, without naming the premier, when she said she could not support hurtful remarks. She was asked Friday whether the subject of her social media post included the premier’s comments.

“If that added hurt to traumatized people, absolutely,” she replied.

The controversy started after protesters toppled two statues of Queen Elizabeth and Queen Victoria on the legislature grounds. Pallister denounced the vandalism, and said people who came to Canada — both before and after it became a country — did not come to destroy anything but rather to build communities, churches and businesses.

Indigenous leaders said Pallister was downplaying the harmful effects of colonialism. The premier stood by his words, added he never used the word colonialism, and said he was trying to appeal for people to work together.

The fallout grew when two Indigenous business leaders resigned from government economic development boards. One called for Pallister to resign.

Other members of the Progressive Conservative cabinet did not directly answer Friday when asked whether they support Pallister’s remarks on Canadian history.

“If we’re talking right now, we’re not listening. We need to listen, continue to listen, have input and move forward with reconciliation,” said Derek Johnson, minister of municipal relations.

“The benefits I’ve had as a (legislature member) is that I continue to learn every day about new things and old things, in terms of residential schools and the reconciliation process, and we’re going down that path,” said Reg Helwer, minister of central services.

One political analyst said the Progressive Conservative caucus seems to be sending a message.

“It gives a sense of where the caucus and cabinet are with Pallister right now.,” said Royce Koop, who teaches political studies at the University of Manitoba.

“There’s dissatisfaction and a willingness to gently criticize and contradict the premier. But there’s no appetite to openly and aggressively denounce his comments.”