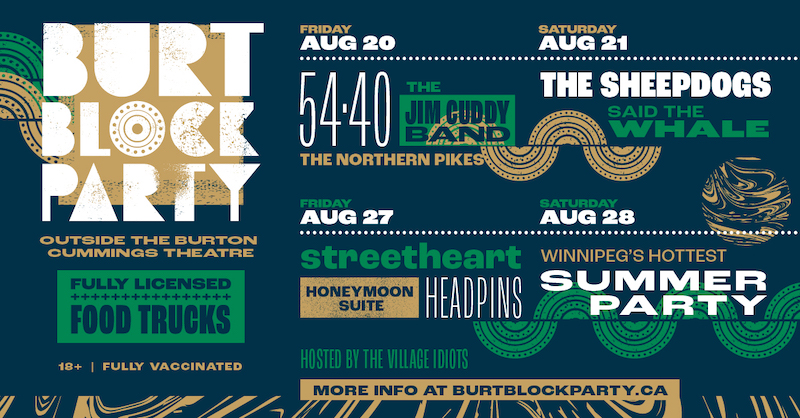 WINNIPEG — The return to live concerts will have music fans rocking in downtown streets in August.

The Burt Block Parties are a series of concerts being held outside the Burton Cummings Theatre between Smith Street and Notre Dame Avenue.

The Sheepdogs and Said the Whale will perform on August 21, while fans of local favourites Streetheart headline the evening on August 27 with Honeymoon Suite and the Headpins.

The Burt Block Parties, which will be hosted by local music lovers The Village Idiots, will wrap up with Winnipeg’s Hottest Summer Party to pump up the downtown streets on August 28.

“We’ve been eagerly waiting for the chance to continue putting on great shows for Manitobans, so we’re thrilled to be back doing what we love to do,” said Kevin Donnelly, senior vice-president, venues and entertainment for True North Sports + Entertainment.

“As strong supporters of Winnipeg’s downtown, we’re looking forward to sharing the energy of live music in and around the Burt with these concerts as we celebrate good music, good people, and our beautiful Manitoba summers, together again.”

Guests are encouraged to bring their own lawn chairs for the concerts and can look forward to a fully licensed site plus several food trucks and vendors curated to add to the festival atmosphere.

Tickets go on sale Wednesday, July 28 at 10 a.m. through Ticketmaster, starting at $39.50 per night plus fees. A limited number of VIP tickets will also be available that include a VIP laminate, indoor washroom access, exclusive bar service, and access to the VIP viewing deck for the concerts.