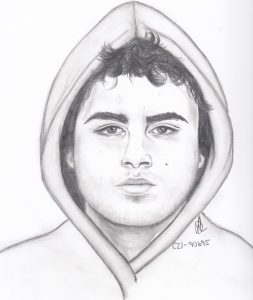 A composite sketch of a suspect related to a shooting in the area of College Avenue and Arlington Street on April 24, 2021. (WPS / HANDOUT)

Winnipeg police have released a suspect sketch and video related to a shooting in April that injured two people.

Two men in their 20s were struck by gunfire while sitting in an SUV in the area of College Avenue and Arlington Street on April 24.

Police say the shooting happened at approximately 5:30 a.m. and sent both men to hospital with serious gunshot-related injuries. One of the victims was subsequently treated and released, while the other man sustained severe and life-altering injuries.

Police released a sketch of the suspect on Tuesday, as well as surveillance video from the incident. The suspect is described as a man in his late teens or early 20s. He has dark hair and has a medium build. He was seen wearing a light-coloured hoodie.