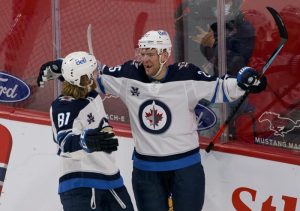 Paul Stastny believes the Winnipeg Jets are on the precipice of something special.

The 35-year-old centre knows, though, that he’s not the only NHL player who is excited about his team this off-season.

“Everyone thinks they’re one or two pieces away but when you have a goalie like (Connor Hellebuyck) and the offensive firepower and some of the dynamic defencemen, you’re right there,” Stastny said on a video call Tuesday.

The difference with the Jets, he added, is the hunger and drive — especially after last season’s disappointing end.

Winnipeg finished the regular season third in the one-time-only all-Canadian North Division with a 30-23-3 record.

The Jets knew they were the underdogs heading into a first-round playoff matchup against Connor McDavid’s Edmonton Oilers. But Winnipeg swept the series.

The magic dwindled in the second round, with the Montreal Canadiens ousting the Jets in four straight.

“What happened last year, we kind of got a taste of what the potential could be and we want to keep building on that,” Stastny said.

That potential is part of what motivated the veteran forward to sign a one-year, US$3.75 million deal with the Jets on Monday.

The fact his family has adapted well to living in Winnipeg helped, too.

“At this point in my career, I’ve been different places, I’ve played for different coaches, different organizations. And (Winnipeg) was the best for fit for me on the ice and off the ice for my family,” Stastny said.

Last season marked Stastny’s first full year with the Jets. He came to Winnipeg — for the second time — last October in a trade with the Vegas Golden Knights.

He previously played 19 games for the Jets in 2018 before signing with Vegas as a free agent.

The six-foot, 193-pound Quebec City native had 29 points (13 goals, 16 assists) in the pandemic-condensed campaign last year, and added a goal and an assist during the playoff run.

Winnipeg was solid through much of the regular season but faltered down the stretch, losing seven games straight in late April and early May.

While the losing skid was difficult, it was encouraging to see the camaraderie in the locker room and how players refused to quit, Stastny said.

There are a number of lessons the group can take from last year’s highs and lows going forward, he added.

“When you can keep that core intact, a lot of the same players, everyone kind of remembers the success and the bitter taste of the defeat,” Stastny said. “It kind of motivates them to bring more to the table and realize what we can do to win, whether we’re playing against a defensive team or a high-flying offensive team.”

The Jets added to the group on Monday, too, acquiring defenceman Brenden Dillon from the Washington Capitals for second-round draft picks in 2022 and 2023.

Stastny has watched the six-foot-four, 220-pound defenceman develop his game and said Dillon’s offensive side has grown markedly in the last few years.

“He does play with that edge, he plays with that nastiness a little bit. And that’s big,” Stastny said.

Dillon, 30, was at playing beer league hockey with a neighbour in Washington, D.C., Monday when news of the trade reached him via social media.

“I think any time you get traded there’s a little bit of frustration that goes into it,” he told reporters on a video call Tuesday. “There’s kind of the ‘Could I have done something differently?'”

After registering 19 points (two goals, 17 assists) last season, Dillon felt he had played some of his best hockey. And with three years left on his contract with Washington, he wasn’t expecting to move during the off-season.

Still, the New Westminster, B.C., product is looking forward to playing in front of an excited and passionate market with a “really good team.”