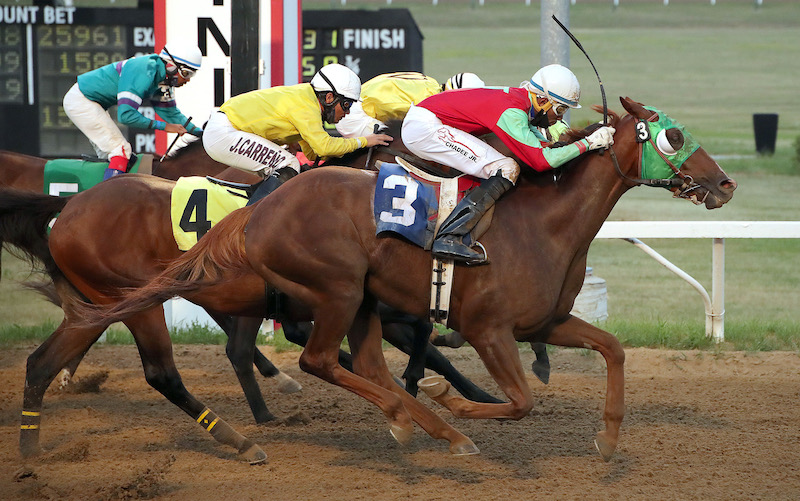 Flash of Glory wins the incredible finish in the Manitoba Derby trial at Assiniboia Downs on July 12, 2021. (JASON HALSTEAD PHOTO)

WINNIPEG — It’s now a $100,000 race with a $1 million bettor’s guarantee and it has all the ingredients for a perfect night of racing.

Not to mention that Robertino Diodoro and Robert Vanoverschot are back, Flash of Glory will put his Derby Trial title on the line, and 12 thoroughbreds will head to the starting gate as the 73rd Manitoba Derby, over a mile and an eighth, goes to post at Assiniboia Downs on Monday night.

“The owners of the horses in this year’s Derby have really stepped up and created a great opportunity for themselves,” said Downs CEO Darren Dunn during a virtual news conference on Thursday. “A big thumbs up to the owners and congratulations to everybody involved in this race. We’re looking forward to a safe and very exciting race on Monday.

“We also wanted to make this an outstanding event for fans and horseplayers. We’re thrilled to have some fans in the stands and offer what is set up to be a huge betting event with a potentially life-changing payout for someone with the $1 million guarantee.”

“Horsemen were patient and supportive through a challenging season last year, forcing them to sacrifice a number of racing opportunities,” Dunn said. “We’re now in a position to return that support.”

As well, on Monday, the Downs will offer a $1 million payout if there is a bettor who has the only winning ticket of the Jackpot Pick 5. If there is more than one winning ticket, all winners will share in the mandatory jackpot payout scheduled for that day which could exceed $1 million.

The $1 million guarantee payout on Derby Day will be offered providing the Jackpot Pick 5 pool is not won before then. If that happens, the Derby Day guarantee will be $250,000 to a sole ticket holder and it will not be a mandatory payout.

“We really wanted to make a big bang this year with the Derby”, Dunn continued. “And what better way to do that than with an unprecedented $1 million guarantee for a player with a single winning ticket. With the excitement from this, it is quite possible that the pool could even be more.”

The pool requires the correct selection of the winners of the last five races of the program and tickets cost just 20-cents per combination.

Then, of course, there is the big race. Last year, five horses went to starting gate in a race that was won by three-year-old Kentucky-bred gelding California invader Mongolian Wind, owned by California’s Mongolian Stable, trained by Wade Eno and ridden by Wilmer Galviz.

This year, with that $100,000 purse on the line, 12 horses will step into the gate. As of Wednesday, the post-positions were set:

“It’s quite an impressive field,” said Dunn. “Riobertino Diodoro is back with Myopic. Robertino has won three of the last five Manitoba Derby races and he has an outstanding horse in Myopic. And Robert Vanoverschot has returned this year. If you go all the way back to 2002, and the winning Derby horse was Lord Shogun, trained by Robert Vanoverschot. So, it will be great to have both trainers back and see what they’ve brought with them this year.”

Diodoro, one of the leading trainers in North America, has won the Derby with Oil Money (2019), Sky Promise (2018) and inside Straight (2016). He has the morning-line favourite in this year’s Derby with Myopic at 8-5. Cozy Bear has been set at 4-1, Vanoverschot’s grey/roan gelding Uncharacteristic is at 6-1 and Derby Trial winner Flash of Glory, owned by Winnipeg’s True North Thoroughbred’s opens at 8-1.

Popular owner, Texan Henry Witt Jr., has two horses in the race, both trained his close friend, Jerry Gourneau. Witt’s Taquito is at 15-1 while Stone Café is 24-1. Witt’s Taquito is a long shot with a real shot and could be worth a few dollars to a courageous bettor.

“We’re excited to report that we’ve assembled a maximum of 12 horses going to post in what is a competitive and talent-laden field from far and wide,” said Dunn. “There is never a guarantee how many horses will go to post in any stakes race and we’re so very pleased with our decision to return the prize money to $100,000. It’s been met with interest and enthusiasm.

“I want to recognize and thank our racing department who worked so diligently to assist in getting our field together for Monday’s race and to our team here at Assiniboia Downs, who extend every effort they can to recognize and welcome those who point their horses toward us, whether it’s locally or from abroad.”