Home » The Canadian Press » Manitoba First Nation Sending Some Residents to Winnipeg Due to Wildfires, Smoke

Manitoba First Nation Sending Some Residents to Winnipeg Due to Wildfires, Smoke 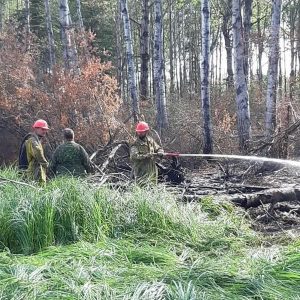 Canadian Forces personnel spray water in a burned section of forest in Manitoba in an undated handout photo. (THE CANADIAN PRESS/HO-Canadian Forces)

WINNIPEG — A northern First Nation in Manitoba is sending some of its members south because of smoke and wildfires.

The Canadian Red Cross says about 100 residents took a bus to Thompson and then flew to Winnipeg, where they will stay in hotels.

A spokesperson for the Red Cross says more people will be flown to Winnipeg Wednesday, but the total number was unknown.

There are 3,200 residents from Little Grand Rapids, Bloodvein, Pauingassi and Berens River First Nations currently staying in hotels in Winnipeg and Brandon because of the fires.

There are 154 wildfires burning in the province.

There are several air quality warnings across the province, including in the Split Lake region.

Environment Canada says forest fires across the central and northern Prairies are sending smoke throughout much of Manitoba.

The Canadian Armed Forces is assisting with monitoring and suppressing fires in six different areas, with the most recent deployment to a wildfire at Pinaymootang First Nation in southern Manitoba.

The military says there 120 soldiers working throughout the province.