Home » Sports » Undefeated Filly Melisandre Out for the Season

Undefeated Filly Melisandre Out for the Season 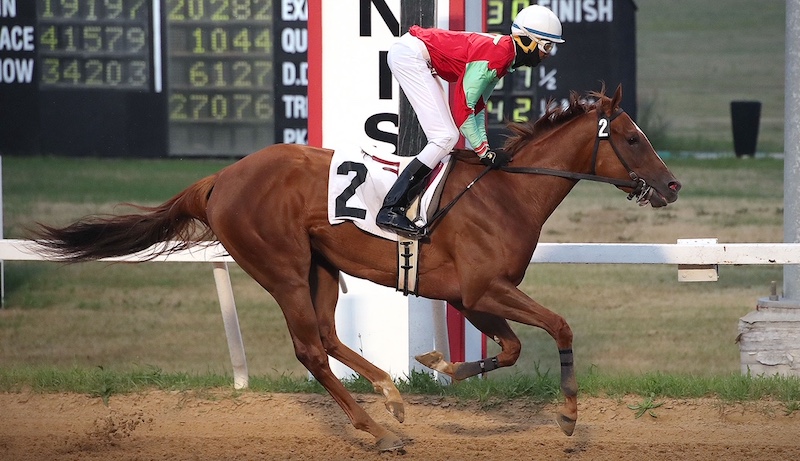 On Thursday morning, trainer Lise Pruitt discovered swelling on the filly’s knee. By Thursday afternoon, it was determined that Melisandre had a small bone chip in the upper chamber of her knee and surgery was scheduled immediately.

“She’s out for the year,” said her owner Barry Arnason. “She’d just galloped around (on Wednesday night) and won by 12 ½ lengths and she looked great. She even looked great when we left last night and we were starting to prepare to get her ready to run in the $50,000 CTHS Sales Stakes in Edmonton and then we were going to take her to the States to see how she could do. After last night’s race we were all thinking we might have another Escape Clause here.

“Then this morning there was swelling on the knee. We got an X-ray done and she had a little bone chip in the upper chamber. It’s not really serious but she needs the surgery to clean it out and now we’ll shut her down until next spring.

“We’ll get her healthy over the winter and start her out as a four-year-old back at Assiniboia Downs and then see what happens.”

It was a shocking turn of events after Wednesday night’s 46th running of the $35,000 R.C. Anderson Memorial Stakes over one mile for three-year-old fillies.

Melisandre went off as the prohibitive favourite at 1-9 in a small four-horse field and she was almost perfect. She duelled for a few strides on the backstretch with Marianda, but was up by a head after the first quarter. She led by a half a length at the half-mile pole and then started to ease into a gallop. Jockey Stanley Chadee Jr. never even bothered to ask her for anything. In fact, Chadee Jr. never bothered to sit down. He hand-rode her as if it were a morning gallop, standing in the irons all the way around the track.

She started to stretch her legs at the turn, led by 2 ½ at the three-quarter pole and then, after Chadee Jr. looked back to see where the other three horses were, she opened up her stride and cruised to a 12 ½ length victory. Chadee Jr. even pulled her up at the finish. It was amazing to watch.

She was presented her trophy, her owners were ready to cash the $21,000 first-prize cheque and she was going to Alberta to start running for big dough, but then, for reasons that are still not clear, her knee swelled up.

“I’ve already booked her surgery with Doc Elders, the vet,” said the 68-year-old Arnason. “To have it happen after such an easy race, it’s amazing what goes down in the business. It’s the last thing any of us would have expected after Wednesday’s race. It really was the thrill of victory and the agony of defeat one day to the next.”

Despite the setback, she is still undefeated. Last year, she won a Maiden Special Weight on July 22 and then cruised to victory in the 31st running of the $30,000 Debutante Stakes. Then she won the 32nd running of the $35,000 CTHS Sales Stakes for two-year-old Manitoba-breds and capped her two-year-old season with a win in the $30,200 Buffalo Stakes on Sept. 15, 2020.

“I don’t think there was a filly in Western Canada who could touch her,” said Arnason. “I thought for sure, she’d win in Edmonton and then we’d go south and maybe spend next year at Woodbine. She was running so good. But now, we’ll take care of her over the winter, get her back into shape and hopefully, she’ll be back next year.

“I guess now, I’m going to have to go to the yearling sale and buy her full sister, just to see how good she’s going to be. One thing about racing business I’ve learned is that there are no guarantees. You can be riding high one day and come crashing down the next.”