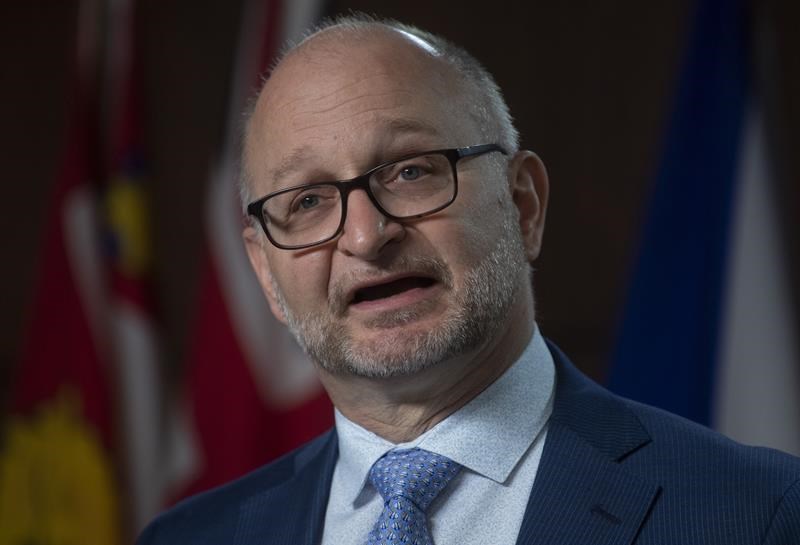 Justice Minister David Lametti delivers his opening remarks during a news conference in Ottawa, Friday, May 7, 2021. (THE CANADIAN PRESS/Adrian Wyld)

OTTAWA — The federal government is committing $321 million in new funding for Indigenous communities and appointing a special interlocutor to propose law and policy changes to better respond to the findings of hundreds of unmarked graves at former residential school sites.

The announcement comes as Prime Minister Justin Trudeau is widely expected to soon call an election in which his government’s record on Indigenous reconciliation is set to be a major issue.

Crown-Indigenous Relations Minister Carolyn Bennett told a virtual news conference Tuesday the funding will include $83 million that will be added to an existing $27-million program to fund searches of burial sites and commemorate the children who died at residential schools.

The funding will also include $107 million for programs to support healing from intergenerational trauma and $100 million over two years to help Indigenous communities manage residential school buildings, whether those plans include demolition, rehabilitation or construction of new facilities, the government said.

The Liberal government will also set aside $20 million to build a national monument in Ottawa to honour the survivors and all the children who were lost. It will be a commemorative space where Indigenous and non-Indigenous peoples can gather to “express their collective grief and find a way forward to heal together,” said Heritage Minister Steven Guilbeault.

Bennett said the government will also create a national advisory committee, made up of archeology, forensic, pathology and mental health experts, to advise Indigenous communities and the government about work to find and identify the children.

Natan Obed, the president of Canada’s national Inuit organization, said the committee can have a “very meaningful role” in directing both the government and Indigenous communities to do the necessary work to achieve “respect and dignity for all those affected by this terrible Canadian tragedy.”

National Chief RoseAnne Archibald of the Assembly of First Nations welcomed the government announcement but said it is late.

“It’s a long overdue step in acknowledging the devastating harm that these institutions have had and continue to have on many generations of our people,” she told the news conference.

She said residential schools were “institutions of assimilation and genocide” and the Canadian government along with the churches committed crimes against humanity at these facilities.

“I no longer want to call them schools,” she said. “Now is the time for accountability, action and healing.”

Archibald said she looks forward to working with the new special interlocutor.

The special interlocutor will work with Indigenous communities and the government to propose changes to federal laws, policies and practices related to unmarked graves at residential schools, said Justice Minister David Lametti.

“(The special interlocutor) will identify needed measures and recommend a new legal framework that respects the dignity of burial sites and Indigenous children,” Lametti said.

“They will evaluate federal laws, policies and practices surrounding unmarked and undocumented graves and burial sites at residential schools, and set out responsibilities for their protection.”

He said Canada currently does not have the necessary legal tools to deal with the complex issues presented by the findings of unmarked graves.

“I will admit that there have been moments during this time where I wish I had the powers that some have attributed to me and my office,” he said.

The special interlocutor will be selected following discussions with Indigenous leadership and communities and the individual’s mandate will be to rebuild trust, Lametti said.

David Chartrand of the Métis National Council said the announcements sends a message that Indigenous issues are “a priority for the prime minister, a priority for his government.”

“This country is on a journey together … I ask all Canadians to join us in this journey, because it’s going to take us time,” he said.

“We need to look at: How do we address the crimes of the past?” he said. “Our people out there, they’re seeking justice.”

However, Charlie Angus, NDP critic for Indigenous children, said in a statement the Liberal government’s commitment to appoint a special interlocutor was a “major climb down.”

He and NDP MP Mumilaaq Qaqqaq recently led a rally calling for an independent investigation into the crimes that took place at residential schools.

Several Indigenous communities have announced since spring that hundreds of unmarked graves have been located at former residential school sites.

In June, the Lower Kootenay Band in British Columbia said a search using ground-penetrating radar had found what are believed to be 182 human remains at a site close to a former residential school in Cranbrook.

Cowessess First Nation earlier said that ground-penetrating radar detected 751 unmarked graves at the former Marieval Indian Residential School east of Regina, Sask., a few weeks after the finding of what are believed to be the remains of 215 children in Kamloops, B.C.

On Tuesday, three Vancouver-area First Nations launched an initiative to find answers about the children who once attended St. Paul’s Indian Residential School in North Vancouver but never made it home.

The Squamish, Tsleil-Waututh and Musqueam Nations announced on Tuesday an Indigenous-led plan to confirm the oral histories told by St. Paul’s survivors about children who disappeared.