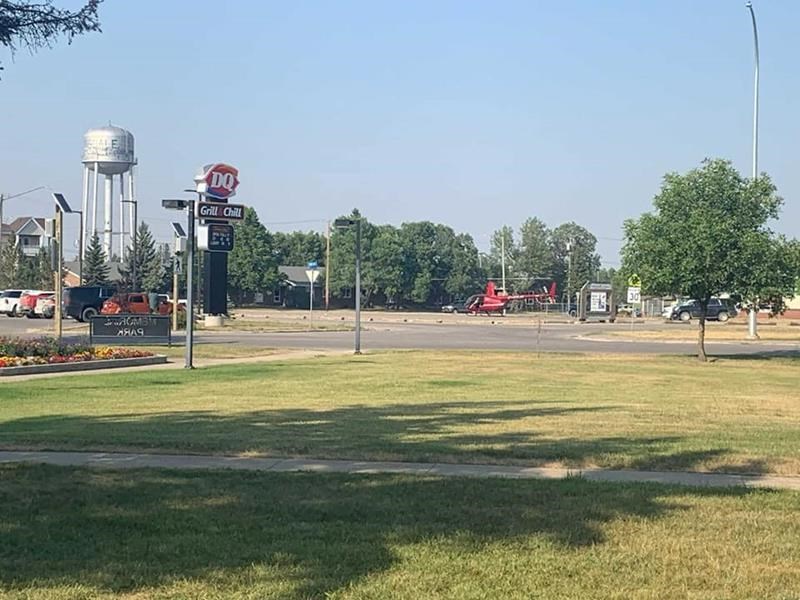 Mounties say a man is in hot water for landing a helicopter to pick up a cool treat in a Saskatchewan town. A helicopter, which landed in a parking lot, is seen in Tisdale, Sask., in a July 31, 2021, handout photo. (THE CANADIAN PRESS/HO-RCMP)

TISDALE, Sask. — Mounties say a man is in hot water for landing a helicopter to pick up a cool treat in a Saskatchewan town.

RCMP said in a news release Tuesday that they received a complaint on July 31 that a helicopter had landed in a high-traffic parking lot in Tisdale, which is about 215 kilometres east of Saskatoon.

They said the helicopter blew up dust and debris through the area that includes schools and an aquatic centre.

An investigation determined the landing was not an emergency.

Police said a passenger left the helicopter and went into a nearby Dairy Queen restaurant to buy an ice cream cake.

Officers said the pilot, who is a 34-year-old man from Leroy, Sask., had a licence to fly the helicopter but landed in an illegal spot.

The man, who has not been named, was charged with dangerous operation of an aircraft and is to appear in court next month.

Kiara Broeckel, who works at the Dairy Queen, said store employees didn’t know the customer had arrived by helicopter until the RCMP news release.

Since then, she said town residents have visited to ask if there is going to be another fly by and if the ice cream cakes are really worth a helicopter trip.

“Apparently they are,” said Broeckel. “I wouldn’t think you would take a helicopter to go get ice cream, but I guess some people do.”