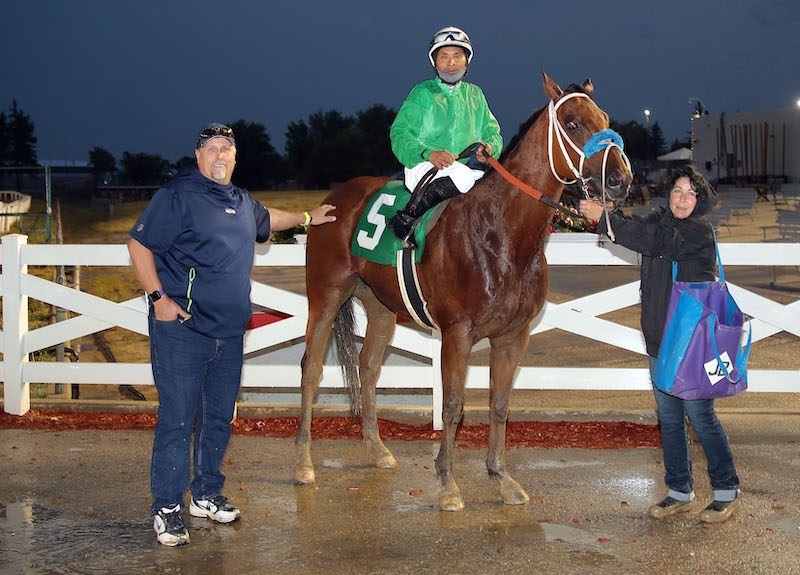 WINNIPEG — Jared Brown remembers the first time he ever went to a race track.

Looking back, it’s the reason he’s been in the horse racing business for the better part of the last 30 years.

“I was 18 and I’d just finished high school,” he recalled. “I got a job cleaning stalls for a lady who had show horses but she also bred race horses at a different farm. Her husband wanted to know if I’d like to go to the track one night. So, my dad and I went with him and I was making $800 a month cleaning stalls at the time. but I still took $50 with me. My boss had one horse of his own on the card at Longacres in Renton, Wash. It was 19-1 and I bet him $5 across the board and he won.

After that night, Brown went back to cleaning stables, but it wasn’t long before he was working at a training centre. Then, a year later he was at a track and a year after that, he was almost running a barn. These days, he’s one of the most accomplished trainers in the business and while he’s never been the champion trainer at Assiniboia Downs, it seems as if he’s in the winner’s circle every night.

In fact, Brown has just come off a great week. He won with Soul Obsession, owned by Bonnie McCrory and Gary Danelson on Monday night. Then with Mark Ye Well, a horse he co-owns with Lucky 8 Stable on Tuesday. And he completed his hat-trick with Mr. Benz, owned by Ira Donald and Kane Kachur on Wednesday night. He probably should have bet on Mr. Benz who paid 11.30, 5.80 and 2.80.

In all, the three victories gave him 30 on the year and he’s solidly in second place in the trainer’s standings just 10 wins behind the leader and defending champion Jerry Gourneau. Now, with 30 wins, 19 seconds and 13 thirds and $317,127 in earnings in just 115 starts (Gourneau has 255 starts), Brown has a slim shot at his first-ever trainer’s championship.

Although, to be fair, winning a championship is no longer his priority.

“It’s tough to win a trainer’s championship,” he conceded. “Back in 2009, I really chased after it and I ended up second, but it’s one of those things. I don’t chase it anymore. If it happens, that’s great. I’m at a point now where I just want to do the best I can with what I’ve got. I’m having a good year and that’s worth it.”

Jared Brown has been at Assiniboia Downs for 22 seasons. He’s a fixture at the track, both highly respected and well-liked. And he’s paid his dues. He’s really paid his dues. After about eight years of working the barns at Longacres in Renton and Emerald Downs, outside Seattle, he got his trainer’s license and wound up in Winnipeg. It was not a particularly long and winding road.

“I started in Seattle years ago as an assistant trainer for two really good trainers there – Mike Chambers and Howard Bellmore,” he recalled. “I worked for Howard the longest and at the same time I was breeding horses. It got to the point where I had to make a decision on whether I train horses or breed horses and I chose breeding because I was more on my own. Then, I absolutely hated it when I realized I was no longer going to the track.

“I did it for five years in total, but I only did one year on my own and realized I wanted to be at the track. So, I got rid of everything I could and what I couldn’t get rid of, I took it back to the track. I had a mare who hadn’t had foals yet and took her back to the track. Although, the first horse I ever won with was a son of Seattle Slew that I bred myself.”

However, while at Emerald Downs, he was disgruntled. It seemed as if the rich burghers at the track were more interested in bringing in big stables. They weren’t at all interested in cultivating their own.

“It was 1998, I’d taken out my trainer’s license and Emerald Downs was just getting going,” he explained. “At that point, they were getting a lot of outside interest and they stopped doing a good job of taking care of their own. They basically forced me into looking for somewhere else to go. For me, it turned out great. I ended up here at Assiniboia Downs in 1999 and I’ve had a pretty good run here.

“I remember, I was sitting in the kitchen in Seattle and a good friend of mine named Charlie Gibson and I were having a conversation. I was a young guy as a trainer, but I’d been around the track for eight-10 years and Charlie was a smart guy and he asked me, ‘How’s it going?” and I said, ‘Well, I’m in spring training in Seattle working out of stalls that were allocated to somebody else. They were shipping in and I had to get out of there and was probably going to move everything to a training centre or something like that.’ Well, nobody wants to train on a farm and have extra costs. So, I told him, ‘If I could afford to get out of here, I’d be gone in a minute.’

“Well, Charlie looked at me and said, ‘You, know that Ray Miller (former ASD executive) was just here and he said they’ll ship any trainer who wants to go to Assiniboia Downs in Winnipeg.’ I thought he was kidding, but Charlie said, ‘No, they’ll do it,’ So, I got Ray’s number and called him on a Monday, and I was headed to Winnipeg by Wednesday. I’ve been here every year since.”

“This year currently sits at my fifth best year by money earned, but we still have a month to go,” he said. “The most races I’ve won in a year is 43 and we’ve won 30 so far this year so we’re creeping up on that number.

“All the horses are running well. I have to thank my help here in the barn. Those are the people who all make sure the horses get there and take care of them well. And then there’s my rider (Jorge Carreno). I have the best rider on the grounds and he pretty much rides everything for me so we’ve had that going for us, as well. It’s nice to be able to hire the best rider in the place. I’m lucky that way. I like to send a horse over ready to run and the good jockeys like that they have a live horse when they jump on board.”

Brown has 26 horses in his barn right now. He had 35 at one point this summer but claimers and sales quickly cut that back to the current number. He arrived in Winnipeg in the spring from Turf Paradise in Phoenix where he races during the winter with only seven horses, but then his regular clients started dropping off their thoroughbreds at his barn.

“We have mostly claimers in the barn but we have the one really good filly, Extrema,” he explained. “She’s off to Alberta for the $75,000 race, the Century Mile Oaks in Edmonton. She’ll be tough in that race. (Antonio) Whitehall will get the mount on that one.

“You know, I thought maybe I’d have 15 or 20 horses this year, but my main clients, Kane Kachur and Ira Donald, they grew from the year before from having maybe three or four horses to having 10. They’ve really supported me well. All my other clients, instead of having one horse, maybe they have two or three horses now. And every horse I have right now is running well. Every time I lead one over to the paddock, it seems like they’ve got a good shot. Sure, I’d like to win a championship, but really, having nice horses that run well is all you can ask.”