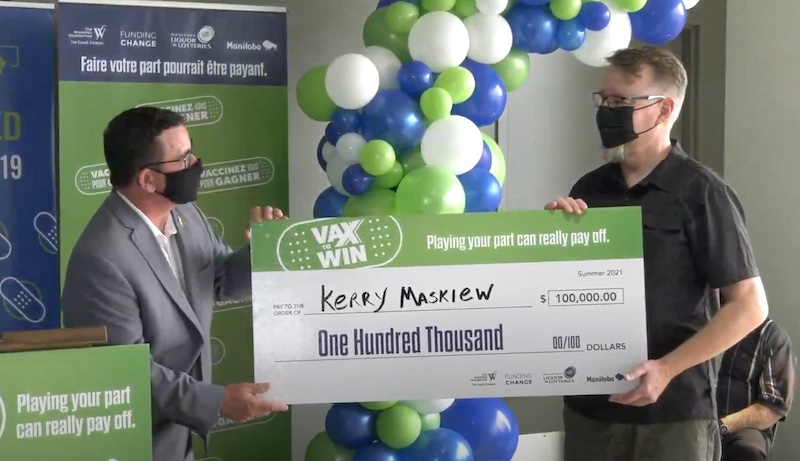 Kerry Maskiew receives a cheque from Crown Services Minister Jeff Wharton as part of the ‘Vax to Win’ lottery on Tuesday, August 17, 2021. (GOVERNMENT OF MANITOBA / YOUTUBE)

WINNIPEG — Seven Manitobans are heavier in the wallet for receiving the COVID-19 vaccine.

In the province’s “Vax to Win” lottery, prizes of $100,000 were awarded Tuesday as part of an incentive program to receive the jab.

“We are incredibly proud and pleased to be involved in a campaign surrounding such an important cause,” said Manny Atwal, president and CEO, Manitoba Liquor & Lotteries.

“I’d like to congratulate all the winners and thank them for making the choice to get vaccinated — your decision helps us all. More good news is on the way in the weeks to come, with our youth winners and our second lottery draw in September.”

Trent Fingler, one of the cash prize winners in the Winnipeg Regional Health Authority, gave a pointed speech at the announcement about his reasons for getting vaccinated.

“I trust the scientific and medical personnel who have dedicated their life’s work to understanding and preventing these diseases. They understand it better than the mass majority of people on this planet, and they’re trying their absolute best to make it possible that we can return to some amount of normalcy,” Fingler said Tuesday.

The 10 winners of $25,000 scholarships have also been drawn and will be announced soon.

The next lottery deadline is Monday, September 6. To be eligible, individuals must have received their second dose of vaccine on or before that date. Winners will be announced later that month, and will include:
• Three $100,000 prizes (Winnipeg Regional Health Authority)
• Four $100,000 prizes (Southern Health, Prairie Mountain Health, Interlake–Eastern and Northern Health regions)
• 10 $25,000 scholarships (youth 12 to 17 years of age)