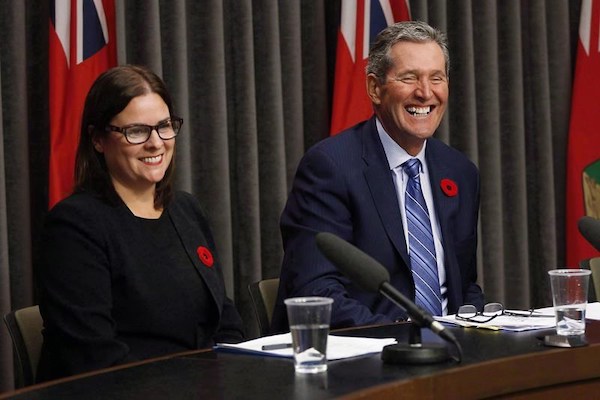 WINNIPEG — Former Manitoba Health Minister Heather Stefanson is taking a run at the Progressive Conservative leadership to become the next premier of the province.

Stefanson, appearing as MLA for Tuxedo on Wednesday, told a news conference at a Waverley Heights community centre that “this is a time to listen, to heal, and to bring Manitobans together.”

Stefanson, who resigned from her position as health minister yesterday, was flanked by 24 fellow PC caucus members and her immediate family for the announcement. Her campaign slogan was unveiled to be “together with Heather.”

“We will work with Manitobans to move forward – to strengthen our health care system, create jobs, improve education, and advance reconciliation and economic opportunity for Indigenous people, Stefanson said.

“Bill 64 is done,” Stefanson said. “Instead, a Progressive Conservative government under my leadership will listen to parents and make sure we have an education system that prepares our children to succeed in everything they do.”

Stefanson says she will spend the next several weeks listening to PC party members and Manitobans to earn their support.

“I look forward to listening to Manitobans across our province over the coming weeks about how we can move forward stronger and more united than ever,” said Stefanson.

The leadership race comes as Premier Brian Pallister announced on August 10 he wouldn’t seek another term as premier. It’s expected he will step down this fall. No date has been set for when Pallister will depart, nor when the PC membership will vote on a new leader.

Experts have said there are no present front-runners but Stefanson, as well as Families Minister Rochelle Squires and Conservative member of Parliament Candice Bergen, have been touted as possible candidates.

Finance Minister Scott Fielding has also said he is seriously considering a run for the job.

Audrey Gordon has been appointed as Manitoba’s minister of health and seniors care and will continue to hold the responsibilities as the current minister of mental health, wellness and recovery.