Home » The Canadian Press » Even from Within: Manitoba Premier Faces Opposition to Completing His Agenda

Even from Within: Manitoba Premier Faces Opposition to Completing His Agenda 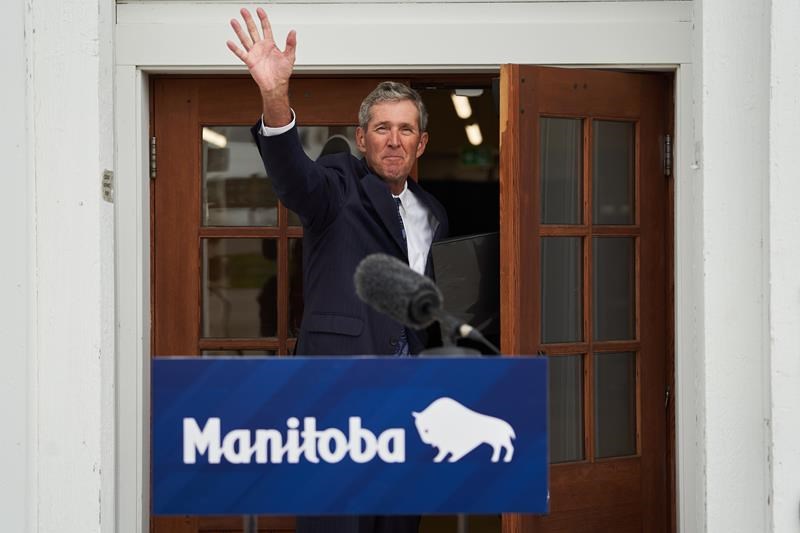 Manitoba Premier Brian Pallister announces that he will not be seeking re-election in front of the Dome Building in Brandon, Man., on Tuesday, Aug. 10, 2021. (THE CANADIAN PRESS/David Lipnowski)

Low opinion polls and opposition within his own caucus as he heads toward retirement have raised doubts about how graceful an exit he will make and whether some of his promised changes will be enacted.

“The premier’s under siege,” says Paul Thomas, professor emeritus of political studies at the University of Manitoba.

“There’s also the fact that more and more ministers are looking at their prospects to become the next leader and premier, and so that dynamic is at work.”

Pallister announced Aug. 10 that he would not seek re-election and asked the Progressive Conservative party to start moving toward a leadership convention. Pallister did not say when he plans to step down and has not answered media questions since.

The party is to set a date soon for picking a new leader, as well as outline rules and entry fees for the race. At that point, Pallister is expected to decide whether to stay on until his replacement is chosen or leave sooner.

The first candidate, veteran Tory caucus member Heather Stefanson, promised this week to kill a bill now before the legislature that would eliminate elected school boards and centralize education decision-making.

Her campaign has the backing of roughly two-thirds of the caucus, and her promise to stop the education reforms was applauded by many standing around her, including Education Minister Cliff Cullen who put forward the bill.

“That’s created a real political mess for the governing party, and there’s no easy way for them to extract themselves,” Thomas said.

While the education bill has attracted the most attention — there are lawn signs across the province in protest and hundreds of people have signed up to speak against it before a legislature committee — there are other proposed laws that have yet to come to a final vote in the legislature.

One would make it easier for police to remove blockades of roads, rail lines and other infrastructure. Another would temporarily halt public regulatory hearings on electricity rates and allow the government to set rates unilaterally. A third would remove the automatic right to binding arbitration in labour disputes.

The Tories have a few options going forward, Thomas said. Pallister could leave soon, have an interim leader appointed and have that person determine whether to go forward with the current agenda.

Pallister could also voluntarily withdraw some of the bills if he stays on longer, or try to push them through if he is willing to test caucus support.

He could also seek to prorogue the legislature to end the current session that is set to resume Oct. 6. That would kill all bills that have not yet been passed and allow a new leader to start with a fresh slate.

The problem with the third scenario is that the government has yet to pass its omnibus budget bill that is required to enact some changes announced in the fiscal plan last spring. They include removing the provincial sales tax from haircuts and salon services.

In the more immediate future, Cullen — and possibly other cabinet ministers — may decide to quit if they are truly opposed to the education bill, Thomas said.

“Ministers who can’t go along with major government policy should probably resign.”

Pallister has already lost some of his inner circle. Stefanson resigned as health minister so she could begin her leadership campaign. And Eileen Clarke resigned from the Indigenous relations portfolio last month over comments Pallister made about Canadian history that were widely condemned by Indigenous leaders.