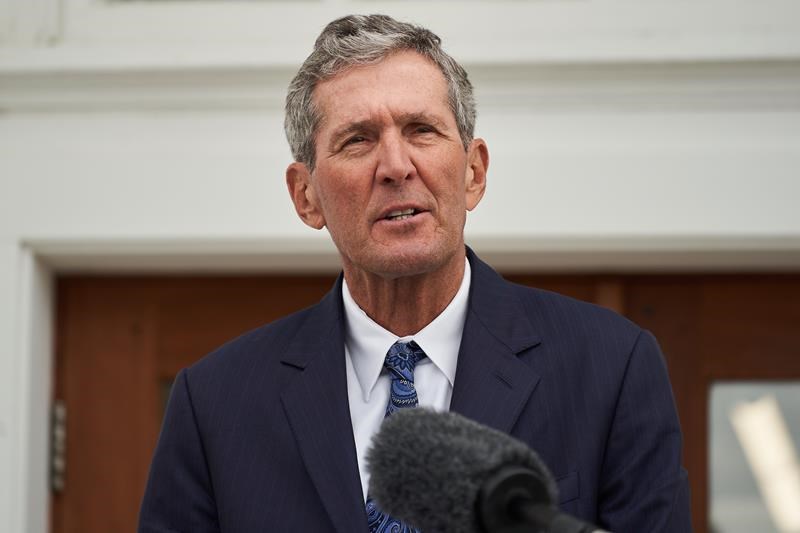 BRANDON, Man. — Manitoba Premier Brian Pallister says he is prepared to be replaced within a matter of weeks and is leaving the fate of major education reforms and other proposed legislation in the hands of his successor.

“I’m working on the assumption that the (Progressive Conservative) executive council will make a decision to have a leadership vote at some point in the next few weeks,” Pallister said Monday in his first comments to the media since he announced Aug. 10 that he would not seek re-election.

The party executive was to meet Monday night to start laying out the rules and a date for a leadership convention.

The only declared candidate so far, former health minister Heather Stefanson, has said she wants to scrap an education bill that would eliminate elected English-language school boards. The proposed legislation, which would also centralize governance of schools, has been widely criticized in Winnipeg and rural areas.

There are other proposed laws that have yet to come to a final vote in the legislature, which is to reconvene Oct. 6.

One aims to crack down on blockades of roads, rail lines and other infrastructure. Another would temporarily halt public regulatory hearings on electricity rates and allow the government to set rates unilaterally. A third would remove the automatic right to binding arbitration in labour disputes.

Pallister said since he has declared his intention to resign, the fate of those bills is in the hands of the next premier.

“My successor will have the opportunity to take various changes to heart, as will the cabinet and caucus, as they always do.”

“The longer this is dragged out in what has become a partisan political drama, the more damage it’s doing to … the mental state of everyone who is waiting to see what the future of public education is in this province,” association president Alan Campbell said.

Pallister had been hinting at retirement since last fall. He faced steep declines in opinion polls this year as Manitoba was hit hard by the COVID-19 pandemic and some intensive care patients had to be shipped to other provinces.

He created more controversy in July with comments about Canadian history. His Indigenous relations minister resigned two days later. Some of his caucus members distanced themselves from the premier’s remarks — a noticeable break in normally tight Tory communications.

Pallister was in a reflective mood Monday as he announced health care capital projects in Brandon, where he attended university, and Portage la Prairie, the city close to the farm where he grew up.

Outside a hospital that is being replaced in Portage la Prairie, Pallister reminisced about his wife giving birth in the facility and about another relative who died there.

He also looked back on his almost three decades in provincial and federal politics and said it was time to move on.

“I’m 67. I lost my sister last year — younger than me. You reflect,” Pallister said.

“I know that there’s a time for renewal and that time, in respect of my role, is upon us.”