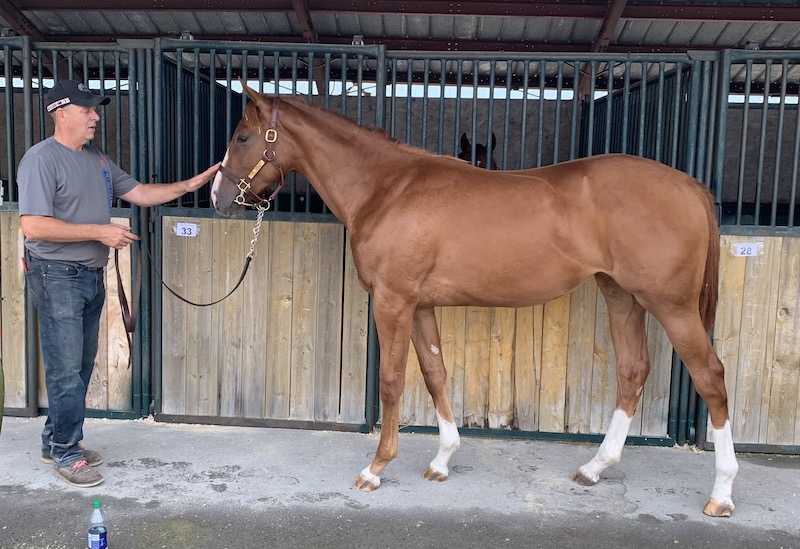 WINNIPEG — It was a pretty great week for Cam Ziprick. On Sunday, he not only had the best CTHS Manitoba Yearling sale of his long career as a thoroughbred horse breeder, but on Monday, Hidden Grace, the gorgeous five-year-old mare he co-owns with his friend Barry Arnason, won the $35,000 Distaff Stakes for older fillies and mares.

On top of that, he and Arnason paid $53,000 to purchase Island High, the full sister of Hidden Grace and unbeaten three-year-old Melisandre.

“Yeah, it was a big week,” Ziprick said with a smile. “First the sale and then to top it off with Hidden Grace winning, well yeah, that was pretty good.”

At the sale, Ziprick brought a number of quality horses from Ziprick Thoroughbreds in Russell, Man. and decided early on that if his own yearling filly, Island High, didn’t get the reserve bid, then he and his pal Arnason, would buy the yearling themselves.

“We had a really good sale,” Ziprick said. “We had some really nice horses, probably the best string of horses I’ve ever brought to the sale overall and there was just a really good vibe at the sale. People were excited. On Saturday, there were a lot of people around, coming to look at horses, Usually, they wait until Sunday morning and you wonder what’s going to happen, but this time the excitement started the day before.

“I actually had three horses I wanted to keep out of my consignment number. I set a reserve price and thought if they don’t bring that number I’m going to keep them. We had a small syndicate formed and we were going to keep these three in the syndicate and then they all went for more than twice my reserve price. It was ridiculous. The best sale I’ve ever had in Manitoba.

“With Island High, Barry and I decided that if we got $60,000 we’d let her go. And she brought $53,000 so Barry bought her back and I kept a half share. She’s a nice filly. We named her Island High because the mother’s name is High Pioneer but also because with being locked up in Canada for nearly two years, we miss the high you get just by going to a Caribbean island.”

Ziprick, who bred the horse with his breeding partner Charles Fouillard, admitted that because Island High is a full sister to two of the finest fillies that have run at Assiniboia Downs in recent memory, it was almost impossible to sell to another barn.

“As a full sister of Hidden Grace and Melisandre, it was pretty hard to let her go, even for the money that was offered,” Ziprick said. “With (stallion) Going Commando being retired, my mare is now being bred to another stallion so there will be no more full siblings out of that mare. So, Barry and I decided we’d own her now.”

After the successful sale, it’s hard to imagine that things could get better for Ziprick, but they did. In Monday night’s $35,000 Distaff, Hidden Grace was simply dominant. In fact, with leading jockey Jorge Carreno in the irons she had lots left in the tank despite winning (officially) by nine lengths.

“She just toyed with them,” Ziprick said. “She won by 10 or 12 and she did it in racehorse time, too. It wasn’t just like beating some horses. She did it in 1:38 and change. She was running.

“That was her last race of the year in Manitoba. Originally, we were going to retire her after this season, but this is the best she’s ever been. She’s really sound, she’s carrying good weight and she’s feeling really good. Once she retires, there is no more Hidden Grace, right, so we might put her back into training next year if everything looks good on her. There was hardly any maintenance on her whatsoever this year. We’re really starting to look at bringing her back as a six-year-old.”

She was so good that she and her former barn-mate, the brilliant Kentucky-bred Miss Imperial, got the Manitoba Matron cancelled for 2021. The $35,000 Matron was scheduled to go to post this Wednesday, but after Hidden Grace and Miss Imperial (who has won four of five races this summer) entered, four of the other seven entries pulled out and Downs race executives decided not to send a three-horse race to the gate.

“That was quite disappointing,” said Ziprick. “It really deprived the fans of seeing the two best mares on the grounds go head-to-head.

“Now, the current thought is to send Hidden Grace back to Alberta to run in the $75,000 Northlands Park Distaff over one mile at Century Mile in Edmonton on Sept. 11. It would be a shame if her career ended at an Alberta track and not here in Manitoba as we’ve always hoped. That said, the door to one more season isn’t closed yet.”

A great deal of the credit for Hidden Grace’s outstanding season has to go to trainer Lise Pruitt. In four starts this year – two each at Century Mile in Edmonton and Assiniboia Downs in Winnipeg — Hidden Grace had three wins and a second-place finish. She won $56,244 and has now won $249,615 in her career. She’s won 15 of 21 starts in four seasons since 2018 including three straight Distaff Stakes wins (2019, 2020 and 2021); two stakes races at Century Mile, including the 2020 CTHS Sales Stakes; and the 2019 CTHS Sales Stakes at Century Downs in Calgary. She won the first nine races of her career in 2018 and 2019 – all stakes races.

“Lisa has done a nice job, she really has,” said Ziprick. “Tim Rycroft had her in Alberta for the winter last year and he took her to spring training out there and ran her twice. But we knew that running a mile out there against those quality mares, she was going to run her hardest every trip. So, we brought her home and had the two easy Manitoba-bred races and then we’d take on the open horses in the last two. Tim did a great job with her in winter and spring and then Lise got her and she has her looking great and feeling good. Half your battle with older mares is keeping them happy and Lise has kept her happy. If you over-train a mare, they get sulky, but Lise has her really happy.

“But the “credit” really goes to Tim for his spring training and getting Grace ready to run. He knew her like the back of his hand. When Lise took over training, she spoke with Tim about Grace’s habits, likes and such, and that helped Lise pick up the reins herself to keep the mare on her best game. She carried on with the mare where Tim left off and kept her in winning form.”

The 2022 campaign next summer, could be a thrilling season for Ziprick’s horses.

“If all goes well, Island High will run as a two-year-old,” he said. “So, we’ll have her and, maybe Hidden Grace next year. And then there is Melisandre. I don’t have a share of her, but because she’s Hidden Grace’s full sister, I cheer for her every time she heads to the gate. Whether we own them or not, they’re still our babies. We cheer pretty loudly for them.”