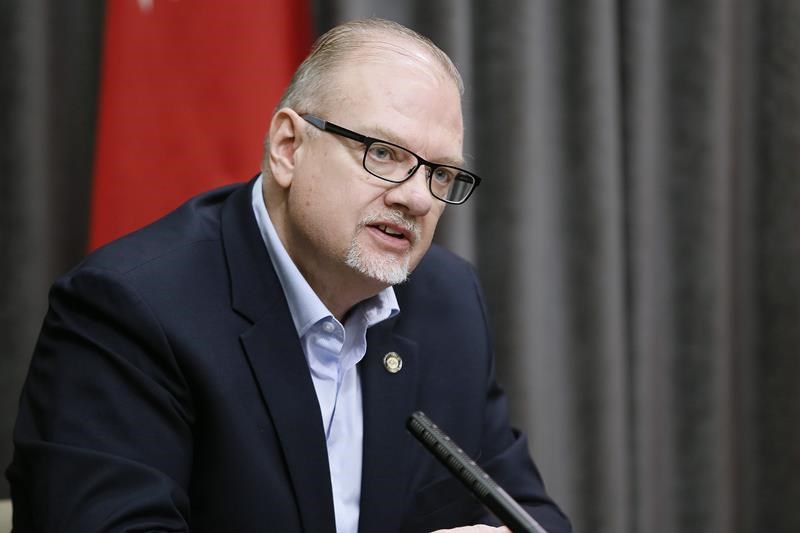 WINNIPEG — Manitoba’s new premier, expected to hold the job for less than nine weeks, is promising to kill five bills currently before the legislature, including one that would overhaul the education system.

Kelvin Goertzen, who was chosen interim leader of the governing Progressive Conservatives on Tuesday, said he wants to offer a clean slate for the leader and premier chosen by Tory party members in a vote set for Oct. 30.

“A new leader has to be able to set their own agenda,” Goertzen said in his first news conference, a few hours after he was sworn in Wednesday as the province’s 23rd premier.

“That’s why I think it’s important to remove these five bills.”

Goertzen, a legislature member since 2003 and cabinet minister since 2016, was chosen by his caucus colleagues to replace Brian Pallister, who announced last month he would resign. Pallister led the party to two majority election wins but his popularity plummeted in recent months.

The next Tory leader could reintroduce the bills in the future, but all three candidates in the race so far have said they would not go ahead with the education one.

The bill would eliminate all English-language elected school boards and centralize decision-making. It has run into widespread opposition and lawn signs denouncing it have sprung up across the province.

Another bill on the chopping block would crack down on protests that block highways and other infrastructure. A third would allow cabinet to bypass public regulatory hearings on electricity rates and set them unilaterally.

Another bill would remove the automatic right to binding arbitration in labour disputes. The fifth would allow for more private liquor sales.

Goertzen’s intentions are a victory for the Opposition New Democrats, who prevented the bills from coming to a vote in the spring.

“What we saw today is a clear indication from the … government in its current iteration that they bent to the will of Manitobans,” NDP Leader Wab Kinew said.

Goertzen signalled that he will take a different approach than Pallister. Goertzen spoke frequently of opening up the premier’s office to input from Manitobans and said he planned to meet soon with Winnipeg Mayor Brian Bowman. Bowman has long complained that he could not secure meetings with Pallister.

“The time and the place to bring those differences and challenges is to a caucus, internally, or to a leader,” Goertzen said.

“I think that they understand that. We’ll see in the test of time if … that message wasn’t powerful or didn’t resonate enough.”