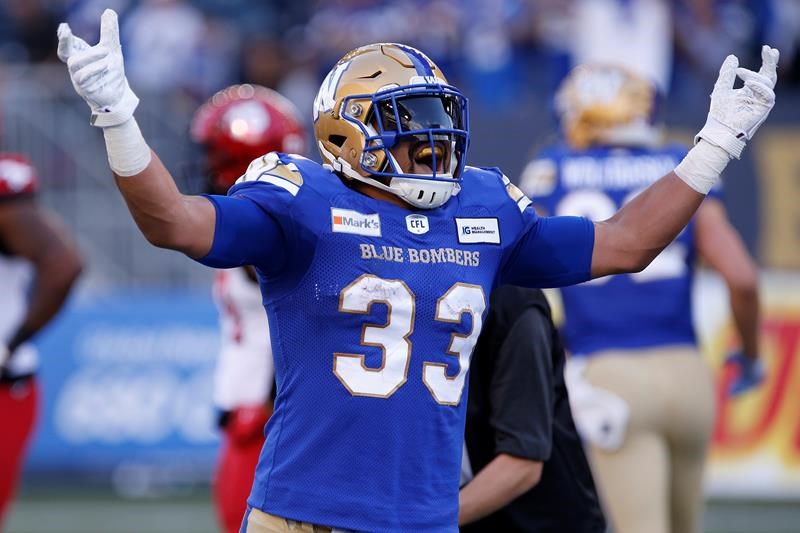 Andrew Harris is back with the Winnipeg Blue Bombers, just in time for their crucial Labour Day series with the unbeaten Saskatchewan Roughriders.

The veteran running back ran for 81 yards and a TD on 17 carries in helping Winnipeg edge the Calgary Stampeders 18-16 last week. It was Harris’s season debut after missing time with a calf injury.

Harris’s return couldn’t come at a better time for Winnipeg (3-1). The defending Grey Cup champions are in Regina on Sunday night to open an intriguing home-and-home series with the Roughriders (3-0).

The Blue Bombers are scheduled to host the Riders on Sept. 11.

Saskatchewan and Winnipeg boast the top records in the CFL. This year, with the schedule condensed to just 14 regular-season games, a sweep for either team could prove quite beneficial.

“It’s massive . . . getting two wins back-to-back is definitely crucial,” Harris told reporters during a videoconference this week. “For us, any time we’re playing a West team, especially with the shortened season, it’s absolutely crucial for playoff implications.

“It’s always fun when you have the Labour Day Classic and Banjo Bowl back-to-back.”

Sunday’s contest will be played before a Mosaic Stadium sellout, which is hardly surprising given the rabid support the Riders traditionally enjoy at home. For opponents, though, that means spending their week of preparation with piped-in crowd noise to try to duplicate the conditions they’ll face in Regina.

“The most annoying part is the crowd noise you have to listen to every day during practice,” Harris said. “It gets annoying and redundant, but it’s part of the process in preparing.

“There’s nothing better than shutting up 30,000 fans in their building and that’s what we’re aiming to do. It’s definitely loud, to the point where you can’t hear the guy next to you, so the communication needs to be at an all-time high, whether that’s hand signals and timing.”

The Riders are coming off a bye, their last contest being a 23-10 home victory over Ottawa on Aug. 21. All three of their wins have come at home, where Saskatchewan is averaging a CFL-best 26.7 offensive points per game.

Earlier this week, quarterback Cody Fajardo was named the CFL’s top player for August. In the Riders’ three wins, Fajardo has amassed 773 passing yards with four touchdowns and one interception while rushing for 139 yards and two TDs.

Riders defensive lineman Jonathan Woodard was named the No. 2 performer for the month, He has a league-best five sacks with five tackles and a forced fumble through Saskatchewan’s first three games.

Winnipeg counters with a defence that’s allowing a league-low 14.8 offensive points per game — Saskatchewan is a close second at 15.0. And the Riders’ unit tops the league in sacks (14) and is tied with the Bombers for second in forced turnovers (10).

Neither Saskatchewan nor Winnipeg have beaten themselves in turnovers, as they’re 1-2 in fewest turnovers this season (two and three, respectively).

Having the 34-year-old Harris back in tow is a definite boost for Winnipeg. The five-foot-10, 216-pound Harris has led the CFL in rushing three times and is also an accomplished receiver.

“I felt great about the game but again definitely a lot of things I can improve on,” he said. “I’m looking forward to proving that this week.”

At Ottawa, the Redblacks (1-2) have suffered two straight losses and their offence comes in averaging just 10.7 points per game. That’s put a lot of stress on a defence that’s allowing just 19.7 offensive points per contest. Montreal (1-2) has also dropped two straight, including a 27-10 home contest last week to a Hamilton squad that opened its season with two consecutive losses.

At Hamilton, the Ticats (1-2) play their home opener coming off the win over Montreal. Dane Evans threw for 183 yards and two TDs in his first start while Frankie Williams accumulated 184 return yards and an interception. But the Als still registered six sacks. Toronto (2-1) comes off a 30-23 home win over Winnipeg on Aug. 21 as Nick Arbuckle threw for 310 yards and a TD while rushing for another in his first start. The Argos should be rested as last week’s game versus Edmonton was postponed due to the Elks’ COVID-19 issues.

At Calgary, veteran Bo Levi Mitchell (broken fibula) was scheduled to resume practising this week after coming off the six-game injured list, but rookie Jake Maier is expected to make a third straight start for the Stampeders (1-3) after passing for over 300 yards in both previous contests. Edmonton (1-2) is set to resume play after 14 Elks players posted positive COVID-19 tests last week. The club posted a 21-16 win over B.C. in its last contest, played Aug. 19 in Vancouver.