Home » Sports » A Coronation is Coming

A Coronation is Coming 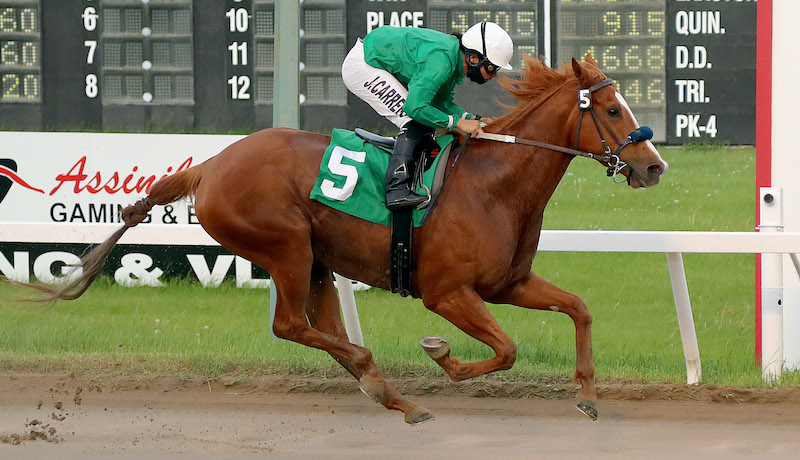 Jockey Jorge Carreño rode Amy on Tour to victory in the first race on June 9, 2021 at Assiniboia Downs for his 1,500th career victory. (JASON HALSTEAD PHOTO)

With six days remaining in the Assiniboia Downs 2021 thoroughbred racing season, a coronation is right around the corner.

The fact that Jerry Gourneau and Jorge Carreno are so far ahead in the jockey and trainer standings this year means that on Sept. 15, Gourneau will win his second straight trainers title and third in four years, while Carreno will win his first jockey crown.

Gourneau has saddled up 47 winners this summer while No. 2, Jared Brown has won 37 times. It’s not impossible for Brown to catch Gourneau but he does have to win 11 more races than the leader during the next six nights of racing – only 42 races in total – and that’s quite unlikely. Make no mistake, Brown has had a great year and he won four races last week, but the combination of Gourneau’s large barn and outstanding owner Henry Witt Jr., have catapulted Gourneau to the top of the ASD heap.

Tom Gardipy Jr. is fourth with 20 wins, Lise Pruitt has 16 and the incredible Shelley Brown has 15, tied with Michael Nault for sixth.

On the jockey side of the ledger, this has been the summer of Jorge Carreno since Opening Night back in May. Carreno, 38, is a veteran of 19 racing seasons and has not only suited up at some of the best tracks in the world, but also hopped aboard a Triple Crown contender in 2017.

Most of Carreno’s career has been spent in the west. In fact, it was at Sunland Park in New Mexico where he first rode a horse named Conquest Mo Money as a 2-year-old. That horse eventually reached the Preakness Stakes, the second jewel of racing’s Triple Crown, at Pimlico in Baltimore and Carreno was aboard.

“Yeah, I raced in the Preakness in 2017,” Carreno said earlier this summer. “We finished fifth. That was a big race, the biggest race for me ever. That was exciting.”

It was also exciting this summer when he rode trainer Lise Pruitt’s Amy On Tour ($3.90) to victory in a $9,500 Waiver Claiming race at the Downs for owner Arnason Farms. With that win, Carreno recorded the 1,500th victory of his near-20-year career.

Now, he’s about to be crowned Assiniboia Downs’ champion jockey.

“We were first aware of Jorge when he was a top tier rider in Alberta for one of the leading barns at that time, Robertino Diodoro, who has gone on to become one of the leading trainers in the United States,” said Downs CEO Dunn who was part of the team that brought Carreno to Winnipeg. “We knew right away that if a jockey had already been awarded access to a top-flight barn like the Diodoro barn, then they can seriously horseback. He put up very strong numbers in Alberta. We were also aware of him riding in the United States, specifically in Arizona. So, when a former jockey agent and trainer at Assiniboia Downs, Mike Pierce, who is now at Canterbury, brought him to us, we listened.

“We had an incentive program out there to acquire jockeys based on the travel restrictions on the Caribbean that imploded our planned jockey colony. Mike Pierce, who has always kept his eye on Assiniboia Downs and we hope will return one day with his horses, was able to talk to Jorge and we were able to put a deal together to get him up here. The fact he was tied to the Diodoro barn was a big plus, a big check mark on his skill. He’s a great addition to the colony and he elevates the skill in the room. He’s a very professional rider.”

Indeed. And this week, a huge stakes week at the Downs, Carreno will have a number of opportunities to add to his massive lead.

On Monday night, he’ll be on the second morning-line favorite, trainer Shelley Brown’s Real Grace (9/5), in the $35,000 Manitoba Gold Cup over a mile and an eighth. He’ll go nose-to-nose against the favorite, Murray Duncan’s Plentiful (8/5), the 2017 Manitoba Derby champion who has been having a superb year.

Racing returns on Labour Day Monday at 7:30 p.m. There are only six live race nights remaining in 2021.