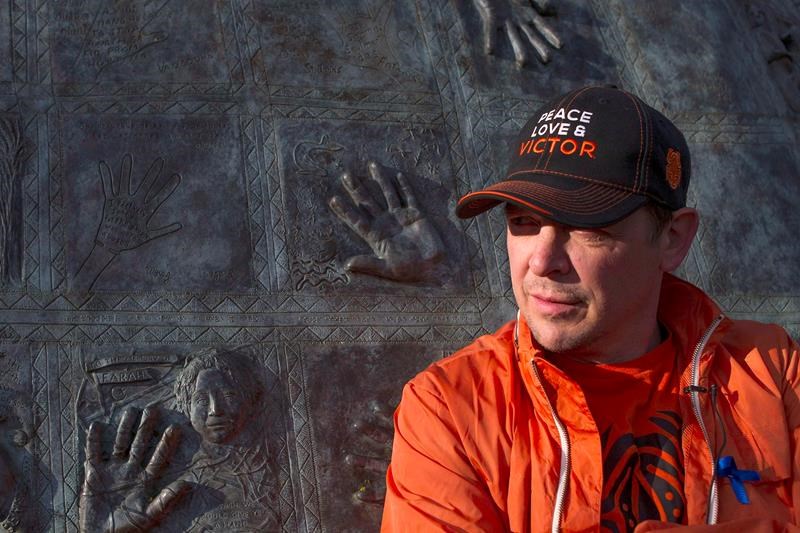 Former NHLer Theo Fleury stands in front of a child abuse monument as he begins “The Victor Walk” in Toronto on Tuesday, May 14, 2013. (THE CANADIAN PRESS/Chris Young)

The school in southwestern Manitoba granted Fleury an honorary doctorate in 2015.

Fleury was awarded the degree for “his significant contributions” to combating child sexual abuse.

The school issued the statement after Fleury tweeted that vaccine passports would be used by pedophiles to track children.

Fleury has since deleted the tweet. He told The Canadian Press he wouldn’t respond to a request for comment.

A seven-time NHL all-star, Fleury had 455 goals and 633 assists over 15 seasons with the Calgary Flames, Colorado Avalanche, New York Rangers, and Chicago Blackhawks.

In his 2009 memoir “Playing With Fire” he detailed the sexual and emotional abuse he suffered at the hands of coach Graham James while Fleury was playing junior hockey.

After the book was published Fleury filed a complaint with Winnipeg police against James. The former coach pleaded guilty to charges stemming from his abuse of Fleury and his cousin Todd Holt. James was sentenced to two years in prison in 2011.

Brandon University’s statement issued on Tuesday praised Fleury for “exposing the rot in junior hockey” and for his ongoing support of survivors of child sexual abuse.

However, the school said Fleury’s recent statements were unacceptable.

“We call on Fleury to recognize that he is now a person in a position of authority, and to recognize that his actions as an authority put him in a place where he can cause harm to others,” said the university. “We hope he takes advantage of the resources at his disposal and seeks greater understanding of the science behind the pandemic and the essential public health role of vaccines.”