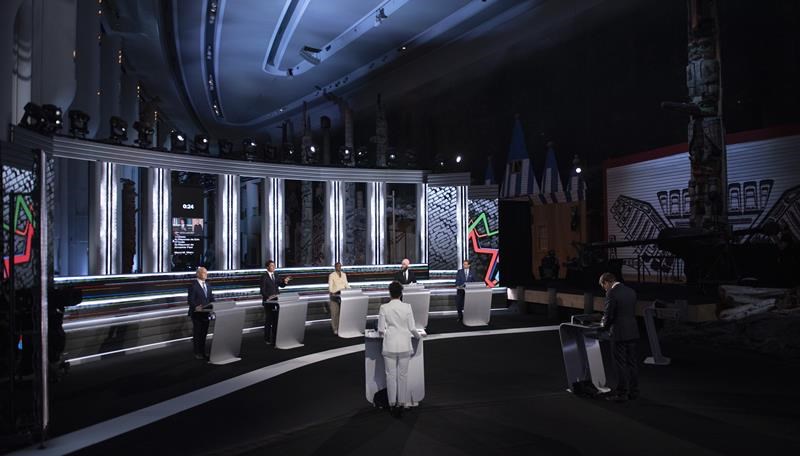 OTTAWA — Federal party leaders were put on the spot with difficult questions aimed at their respective Achilles heels during the opening moments of Thursday’s English debate — their last, best chance to sway voters before the Sept. 20 election.

Moderator Shachi Kurl, president of the Angus Reid Institute, opened the two-hour debate with tough questions for each of the five leaders taking part.

To Liberal Justin Trudeau, it was why he called an election just as a fourth wave of COVID-19 was sweeping the country.

He argued that the debate would show voters have to choose among radically different views on how to finish the fight against COVID-19 and build back better.

To Conservative Erin O’Toole, the question was how can voters trust that he would be in the driver’s seat if elected prime minister, and not his caucus, many members of which have decidedly more conservative views on issues like abortion and climate change.

“I am driving the bus,” O’Toole insisted, stressing that he’s personally “pro-choice.”

NDP Leader Jagmeet Singh was asked to explain why he has yet to release the costing for his election platform. He did not directly respond while saying the NDP is the only party that would make the ultrarich pay their fair share.

Bloc Québécois Leader Yves-François Blanchet took issue with Kurl asking him why he supports “discriminatory laws” in Quebec, which prohibit some public sector workers in positions of authority from wearing religious symbols.

He insisted the laws are not discriminatory but are legitimate laws that reflect the values of the Quebec nation.

Perhaps the most devastating question went to Green Party Leader Annamie Paul, who was asked how she could hope to lead the country when she’s been unable to lead her own party members, some of whom spent weeks prior to the campaign trying to dump Paul as leader.

Paul conceded she’s been through a difficult period but said she’s had to “crawl over a lot of broken glass” to get on the leaders’ debate platform and is proud to be the first Black woman to do so.

People’s Party of Canada Leader Maxime Bernier did not meet the independent Leaders’ Debates Commission’s criteria for participating in either the English-language debate or the French-language debate on Wednesday.

But dozens of his supporters showed up Thursday outside the debate venue — the Canadian Museum of History in Gatineau, Que., just across the river from Parliament Hill — to protest his absence.

The debate was the last of three to be held during the campaign and came 11 days before election day and just as four days of advance polls are set to open Friday.

Shortly before arriving for the debate, the five leaders got together to shoot a video urging all Canadians to get vaccinated against COVID-19.

“It was really important to let folks know that getting vaccinated is not a partisan thing,” said Singh, who initiated the united message, as he made his way into the debate venue.

“I want you to vote for me but it doesn’t matter who you vote for, all leaders agree getting vaccinated is one of the most important things we can do to fight this pandemic, to keep people safe.”

But that united front collapsed instantly once the debate got underway, with the leaders clashing on climate change, Afghanistan and sexual misconduct in the military.

In the hours leading up to the event, the parties sought to stake out positions and attack their opponents, with the Liberals taking aim at the Conservatives’ plan to scrap the Trudeau government’s national child-care program.

The Liberal government has inked five-year deals with eight provinces and two territories to pay for more child-care spaces and reduce child-care fees to an average of $10 per day by 2026. The total cost is estimated at $30 billion, and includes a deal to transfer $6 billion to Quebec, which already offers $8.50-per-day child care, to increase the number of spaces available.

The Tories have said they would honour those deals for the first year if elected to government, but then replace them by converting the existing child-care expense deduction into a refundable tax credit that would cover up to 75 per cent of child-care costs for low-income families.

The Conservatives, meanwhile, highlighted their promise to ban products made with forced and slave labour, specifically calling out China’s treatment of its Uyghur minority while portraying themselves as the best choice for those concerned about human rights abroad.

Blanchet rejected the idea of being part of a coalition federal government after the election.

This week’s French and English-language debates come as opinion polls suggest the Liberals and Conservatives are stuck in a tight two-way race, with the NDP and Bloc poised to determine which of the two main parties emerges victorious.