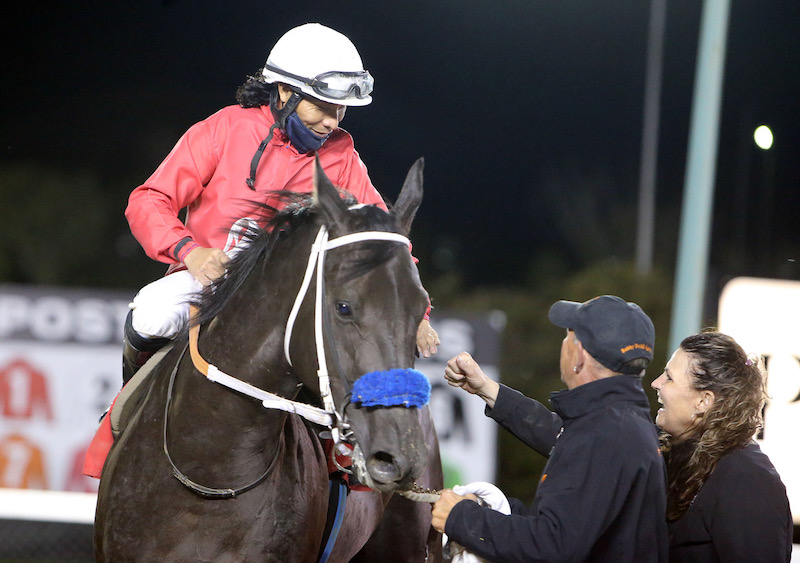 Midnight Salute with Jorge Carreno aboard won the final race of the season at Assiniboia Downs on September 15, 2021, but it was Shelley Brown’s smile (bottom right) that lit up the night. (JASON HALSTEAD PHOTO)

WINNIPEG — At the start of the 2021 Assiniboia Downs live racing season back in April, many people were surprised to see trainer Shelley Brown back in her barn.

Brown had been suffering from more than one virulent form of cancer and it had ravaged her body. In September of 2020, the 47-year-old former ASD trainers’ champion had been given three-to-six-months to live. Very few people believed they’d see Shelley Brown at the start of the 2021 season, let alone at the end.

But there she was, in the winner’s circle on Wednesday night with her horse Midnight Salute with champion jockey Jorge Carreno aboard — the victor in the final race of the season at Assiniboia Downs.

“Last fall, I was in a really dark spot,” she said in April. “It plays with your head every day, being given this death sentence. You’re told you’ve only got months and if you respond to this medication, maybe you’ll get a year or two years. We all know we’re going to die, but to have someone look you in your face and say, ‘If this goes well, you’ll live for a little longer.’ I mean, I was so depressed, so unhappy and so scared. I was terrified.”

But despite her fear, Brown never gave up. Thanks to her doctors, her horses and her huge heart, Brown made it to the start of the live racing season and then finished the year in fifth-place in the trainers’ standings with 19 wins, 24 seconds, 31 thirds and $345,171 in winnings in 149 starts. Not only did she start the season, she ended it in style.

“What an exclamation-point on our season,” said Downs CEO Darren Dunn. “Thank God, Shelley is still with us. And her smile in the winner’s circle on Wednesday night could have lit up the race track. I could have turned the lights off and her smile would have been enough. It was so nice to see. Praise the Lord that she has many more live racing seasons here to come.”

Brown’s win in that final race sent everyone home with a smile, especially after another remarkably successful summer despite Year 2 of a World- Wide Pandemic.

“It’s been absolutely incredible on so many levels,” Dunn said. “We are absolutely thrilled with the results from only our second year of the Monday-Tuesday-Wednesday schedule. The market has responded in spades. We have really enjoyed bringing some weekend excitement to weekday racing.”

The Downs completed the season with the second-best total handle in the track’s history. There was $36,609,401 wagered at the track (in-person, off-track and on-line) over the 51 day meet, which was second only to the wagering recorded in 2020.

“We were on par for what we were forecasting,” Dunn said. “Was it like the anomaly year last year when we did $1.1 million in wagering a day? No, but it’s going to come in around $717,000 a day which, when you consider we were in the mid-$200,000s pre-COVID, we’re still close to triple our pre-COVID numbers. I’m proud of the fact that we were able to achieve the partner-retention that we did. It’s extremely gratifying.”

Gourneau saddled up 58 winners this summer while No. 2, Jared Brown has won 40 times. Make no mistake, Brown has had a great year, but the combination of Gourneau’s large barn and outstanding owner Henry Witt Jr., have once again catapulted Gourneau to the top of the ASD heap. It’s his third trainers’ championship in four years.

On the jockey side of the ledger, this has been the summer of Jorge Carreno since Opening Night back in May. Carreno, 38, is a veteran of 19 racing seasons and has not only suited up at some of the best tracks in the world, but also hopped aboard a Triple Crown contender in 2017.

“Jared Brown made it interesting for Jerry in the trainers’ race,” said Dunn. “Jared has probably never had a more successful season here at Assiniboia Downs. Jerry won by 18 races and that might seem like it was in-hand, but it wasn’t in-hand until late. Jared kept it interesting. But all the credit to Jerry Gourneau. Three titles in the last four years, what can you say?

Dunn says the Downs will operate a 50-day meet in 2022, starting in May and concluding in September. Once again, it will feature a Monday-Tuesday-Wednesday schedule.

“Running a live sporting event during a Global Pandemic during consecutive seasons is not something I recommend,” Dunn conceded. “It was the most epic mountain climbing challenges I can think of and yet we made it to the peak. I just don’t want to do COVID 3.0 in the summer of 2022. Next season, we have the optimism of the return of crowds right from opening night. If we can all get vaxxed and get the borders open, we can bring in so many more horses out of the U.S. that we weren’t able to accept this year. It’s great for our racing program, but it’s outstanding for Manitoba. The amount of money – American money — that gets pumped into the economy is significant. We are a non-profit race track. We’re built as an economic engine for the province and that’s something I want to ramp back up. I take pride in the fact that we are a net-positive for Manitoba and we had to leave a lot on the table this year – again.”

With next year looking brighter, Dunn is also thrilled that there were no COVID infections at the track. Even with the fans back at the end of the season, it was a safe place to be.

“There is so much pride involved, getting to the finish line safe and sound and with solid numbers,” Dunn added. “We have great optimism and hope for the future. We’re on an upward trajectory, one of the most solid tracks in Western Canada. There was a lot to be pleased with.”

The fact that Shelley Brown is still with us and still winning is right at the top of the list.