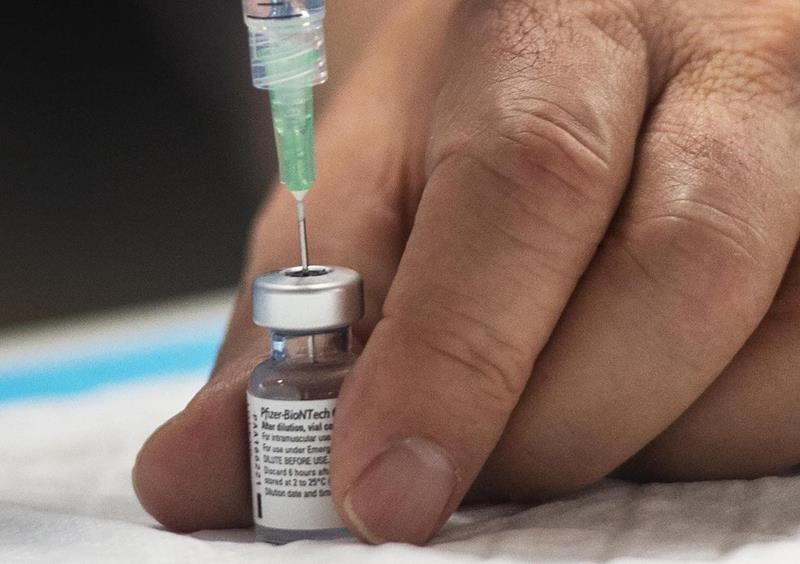 WINNIPEG — The Manitoba government has expanded its eligibility criteria for people wanting a third dose of a COVID-19 vaccine.

The province says it has added residents and staff in First Nations personal care homes.

Dr. Marcia Anderson, who is the public health lead with the First Nations pandemic response team, said the decision will affect about 200 residents and about 400 staff in 10 personal care homes.

First Nations people in Manitoba have been disproportionately affected by the virus.

The most recent numbers from the response team show First Nations people make up 31 per cent of the province’s total cases since the pandemic began, even though they only account for 13 per cent of the population.

“This will help to protect our most vulnerable people and contribute to the maintenance of safe staffing levels as we enter the fourth wave,” Anderson said Monday.

“While a single policy or program decision is not sufficient to address the widespread impacts of colonization and racism on First Nations people, each decision that we have to make is an opportunity to mitigate these higher risk levels.”

Third doses are being offered to staff because they are working in remote and rural locations, where it is harder to replace staff and maintain safe workforce levels.

The Sagkeeng First Nation dealt with an outbreak at a personal care home last month that resulted in 37 cases among residents and staff. The majority of them had been fully vaccinated. Anderson said three people were hospitalized and two died.

Anderson said there was a similar outbreak during the pandemic’s second wave in a First Nations care home, but the recent Sagkeeng outbreak is the only one there has been to that degree since the vaccine rollout started.

The province said plans are being made to include all personal care home residents in Manitoba and it expects third doses will be available for them sometime next month.

Dr. Joss Reimer, medical lead with the province’s COVID-19 vaccine rollout, said the group hasn’t seen evidence that protection for the group is going down. But data from other countries suggests there may be a decrease in protection for some older seniors with health conditions and who have had two doses close together.

“Third doses can be very beneficial to try and push that immune system just a little bit further and get their protection up more similar to what other people experience after two doses,” Reimer said.

Third doses are already available to people who are immunocompromised due to a medical condition or treatment.

Third doses are also available for those who have received one or two shots of a vaccine that is not approved by Health Canada.

Reimer clarified that people who are travelling outside the country, but have received two doses of Pfizer-BioNTech or Moderna vaccines, do not qualify for a third dose. Boosters are not recommended for the general population at this time.

There were 42 news cases reported in Manitoba on Monday for a total of 598 active infections.