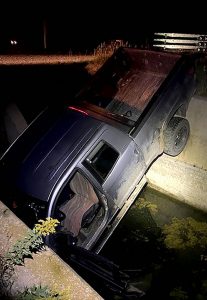 Portage la Prairie RCMP took a man into custody early Monday after reports of an erratic driver just east of the Manitoba city.

Officers were alerted at around 1:25 a.m. that a driver travelling west on Highway 1 struck another vehicle and kept driving. The vehicle was also seen tailgating semi-truck, continually changing speeds, stopping and backing up on the highway, driving with no lights on, and driving into oncoming traffic.

Police were then informed that the suspect was driving in the oncoming lane, causing another vehicle to enter the ditch and roll.

RCMP spotted the vehicle just west of Portage and attempted to stop it when the driver entered a ditch and struck a culvert. He fled on foot but was arrested with the help of a police dog. He suffered minor physical injuries.

The people in the vehicle that rolled suffered minor injuries.