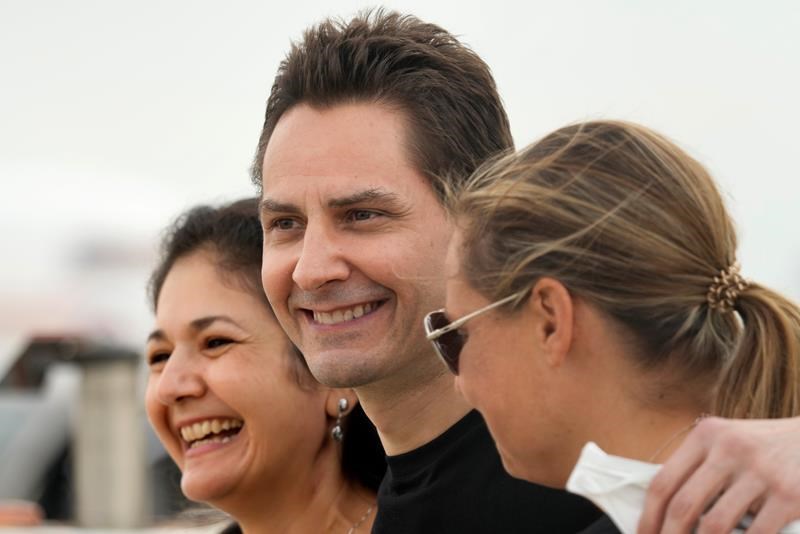 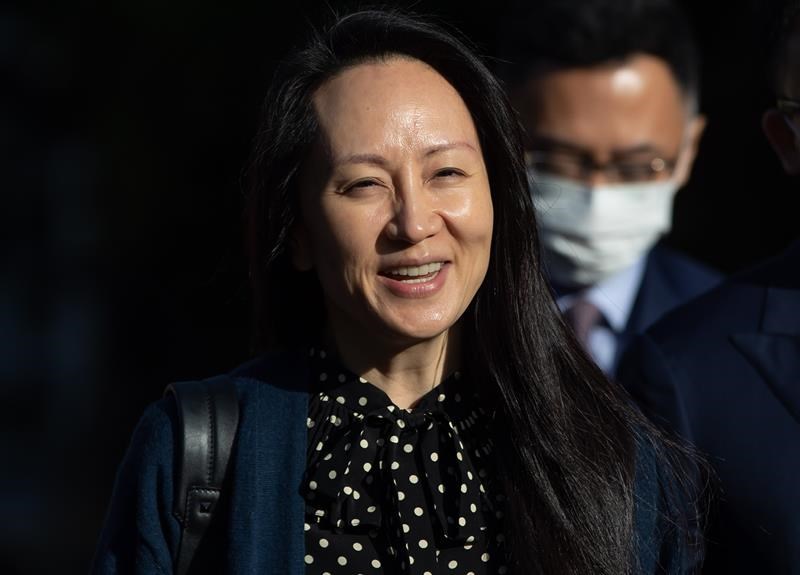 Meng Wanzhou, chief financial officer of Huawei, smiles as she leaves her home in Vancouver on Friday, September 24, 2021. (THE CANADIAN PRESS/Darryl Dyck)

Two Canadians who languished in Chinese prisons for nearly three years held emotional reunions with their loved ones on Saturday after the culmination of a geopolitical saga that saw them return safely to Canadian soil.

Michael Kovrig and Michael Spavor first landed in Calgary aboard a Canadian Forces plane early Saturday morning and were personally welcomed home by Prime Minister Justin Trudeau and Global Affairs Minister Marc Garneau, according to a spokesperson from Trudeau’s office.

After exchanging hugs with the prime minister and bidding goodbye to his fellow captor, Kovrig then boarded another plane bound for Toronto. His wife Vina Nadjibullah and sister Ariana Botha greeted him with emotional embraces on the tarmac, prompting Kovrig to offer a brief assessment of his changed circumstances.

“It’s fantastic to be back home in Canada,” Kovrig told reporters. “I’m immensely grateful for everybody who worked so hard to bring both of us back home.”

Greetings and well-wishes poured in from across the country after the return of the men who have come to be known around the world as “The Two Michaels.”

“Welcome home, Michael Kovrig and Michael Spavor,” Trudeau tweeted after their arrival. “You’ve shown incredible strength, resilience, and perseverance. Know that Canadians across the country will continue to be here for you, just as they have been.”

Just as Spavor and Kovrig took off for Canada late Friday, Meng was making her way back to China from Vancouver after resolving the legal saga that mired all three of them in a geopolitical melee.

The case connecting their fates came to an abrupt conclusion when Meng, the chief financial officer at Huawei Technologies and the daughter of the telecom’s founder, reached a deal with U.S. prosecutors over fraud and conspiracy charges related to American sanctions against Iran.

In a virtual appearance in a New York courtroom, Meng pleaded not guilty to all charges and the judge signed off on a deferred prosecution agreement.

Assistant U.S. attorney David Kessler told court that the agreement would allow for the charges against Meng to be dismissed after Dec. 1, 2022 — four years from when she was first detained in Vancouver —  provided that she “complies with all her obligations” under the terms of the deal.

Prosecutors also agreed to drop a request that Meng be extradited to the U.S. from Canada.

Soon after, Meng walked out of a British Columbia Supreme Court when a judge agreed to a discharge order, vacating her bail conditions and officially closing the Canadian case against her.

Meng’s arrest in Vancouver in December 2018 at the behest of the U.S. has been a source of simmering tensions between Ottawa, Washington and Beijing.

Kovrig and Spavor were arrested in China on espionage charges just days later in apparent retaliation. China has publicly maintained that there is no connection between her case and the men’s imprisonment, but had also dropped broad hints that her freedom could benefit the two Canadians.

Guy Saint-Jacques, a one-time Canadian ambassador to China and Kovrig’s former boss, said the events of recent days further highlight the true nature of the situation.

“Clearly, the Chinese were so eager to get Meng back that they jettisoned all pretensions that the two Michaels had been arrested for good reasons,” he said. “They must acknowledge that their reputation has been severely tarnished.”

While Meng was kept under house arrest in a Vancouver mansion, the Canadians faced much harsher conditions in Chinese prisons where their access to the outside world was extremely limited.

The International Crisis Group, where Kovrig was working while on a leave of absence from his job as a diplomat, commended their colleague for confronting his 1,020-day confinement with “fortitude and humanity.”

“Despite suffering injustice and hardship, he has stayed strong and positive,” the peace-building non-governmental organization said in a statement Saturday.

“He maintained throughout his confinement his grace and humour, as well as a vigorous exercise routine and voracious appetite for reading and discovery.”

Earlier this year, Kovrig and Spavor were both convicted of spying in closed Chinese courts — a process that Canada and dozens of allies said amounts to arbitrary detention on bogus charges in a closed system of justice with no accountability.

Spavor, an entrepreneur who tried to forge ties to North Korea, received an 11-year sentence.  Kovrig had yet to be sentenced.

In China, meanwhile, Meng’s return was carried live on state TV, underscoring the degree to which Beijing has linked her case with Chinese nationalism and its rise as a global economic and political power.

Wearing a red dress matching the colour of China’s flag, Meng thanked the ruling Communist Party and its leader Xi Jinping for supporting her through more than 1,000 days in house arrest in Vancouver, where she owns two multimillion dollar homes.

“I have finally returned to the warm embrace of the motherland,” Meng said. “As an ordinary Chinese citizen going through this difficult time, I always felt the warmth and concern of the party, the nation and the people.”

This report by The Canadian Press was first published Sept. 25, 2021.

← Previous: Many Public Sector Workers in Manitoba Will Need COVID-19 Vaccination or Get Tested Next: Denied Cross-Border Shoppers, Some U.S. Companies Opt to Export to Canada Instead →
Tags: Canada | Justin Trudeau | Ontario | Ottawa