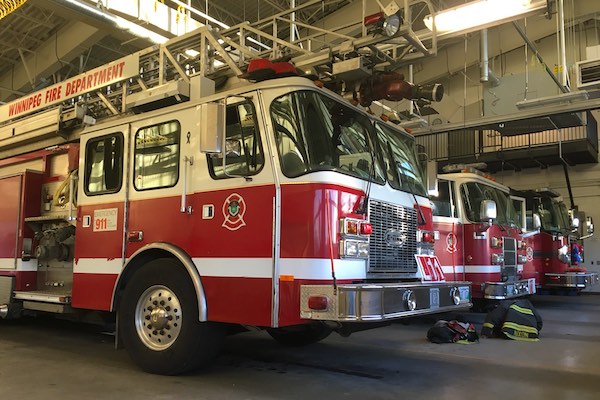 The blaze broke out at around 11:15 a.m. in a vacant warehouse, quickly spreading in size and producing a plume of smoke across the city.

More than 100 firefighters responded to the scene throughout the day, with the smouldering fire successfully extinguished early this morning.

As the Winnipeg Fire Paramedic Service tackled the flames, the roof collapsed and made efforts extremely dangerous to access hotspots. Nearby homes were evacuated and a stationary railcar caught fire, which later spread to several adjoining railcars.

Two firefighters were injured, including one that was sent to hospital in stable condition. The other firefighter was treated and released on scene.

While police were controlling traffic and holding the scene on nearby Higgins Avenue, a witness provided a description of a suspect and where they might have fled. Soon after, officers took a woman into custody in the Elmwood neighbourhood.

Kelsey Ann Thompson, 21, of Winnipeg has been charged with arson causing damage to property and two counts of mischief under $5,000.