By Brittany Hobson and Brenna Owen, The Canadian Press 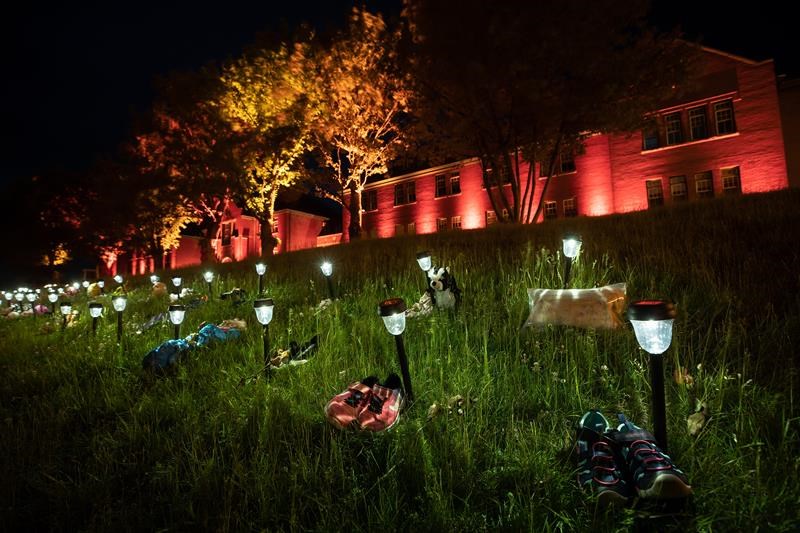 Shoes are placed on the lawn outside the former Kamloops Indian Residential School to honour 215 children after it was announced that ground-penetrating radar had detected unmarked graves near the facility in Kamloops, B.C., on June 4, 2021. (THE CANADIAN PRESS/Darryl Dyck)

On the first National Day for Truth and Reconciliation, dozens of hand drummers formed a circle around a powwow arbour at Tk’emlúps te Secwépemc Nation in British Columbia and they sang loud and proud.

When the clock struck 2:14 p.m. Thursday, people in the crowd bowed their heads for one minute of silence — punctuated briefly by the sounds of children — as a way to honour residential school survivors, their families and those who never returned home.

The time was chosen because of what are believed to be 215 unmarked graves detected earlier this year at the site of the former Kamloops Indian Residential School near the First Nation.

An honour song, which included drumming and singing, was then played.

Evelyn Camille, who spent a decade at the Kamloops school, said she had mixed feelings about the day.

“It is growing awareness, but how is it going to help (survivors) now as part of our healing … they can’t give me back the 10 years that were taken away. The pain is still there,” she said.

Camille was forced to cook and clean and had to steal food in order to survive. She left the school with a Grade 4 level of education.

She said she worked hard to regain her identity, language, culture and ceremonies that were taken away from her as a child.

Assembly of First Nations National Chief RoseAnne Archibald was also at the ceremony.

“This is a day to honour the survivors, the intergenerational survivors and the victims of these institutions of assimilation and genocide,” said Archibald.

“We will actually continue to find and recover our little children in the coming years. We’re at the beginning of this process … Now is the time for accountability in action.”

The federal government announced in June the new statutory holiday would take place every Sept. 30. It built on the momentum of the grassroots-led Orange Shirt Dayto commemorate the history and ongoing impacts of the church-run institutions where Indigenous children were torn from their families and abused.

The day is a direct response to a call to action from the Truth and Reconciliation Commission.

Elsewhere across the country, communities and cities recognized the day with events and ceremonies.

On the Cowessess First Nation in southern Saskatchewan, where children attended the Marieval Indian Residential School until the mid-’90s, Chief Cadmus Delorme said the day is about healing.

Cowessess is another First Nation that reported finding unmarked graves or burial sites at a former school using ground-penetrating radar. In June, it said 751 graves were believed to have been located.

“The truth is going to be really tough. Even for Indigenous people, the trust is hard to acknowledge because of the pain. But we can’t have reconciliation without truth. Today is a day for people to come together,” said Delorme.

On Parliament Hill, there was a sea of orange as thousands gathered on the lawn in front of the Peace Tower for a morning ceremony under a bright, blue sky.

Algonquin Anishinabe elder Claudette Commanda said it was a day to reflect and honour those who never came home.

“Two-hundred and fifteen little voices woke the country,” she said. “From the moment those little ones went into the ground, they were speaking in spirit. They knew there would come a day that we would all hear their voices. And let us hold those children in our heart forevermore.”

In Montreal, people took part in a march that began next to an empty pedestal in a downtown park where a statue of Canada’s first prime minister, John A. Macdonald, one of the architects of the residential school system, was toppled last year.

Maggie Chittspattio, a member of the Naskapi Nation in northern Quebec, said she marched for all the children who died at residential schools and for her mother, who was sent to boarding school against her will.

Prime Minister Justin Trudeau said the day is to reflect on the painful and lasting impacts of residential schools and to honour survivors, their families and their communities.

It is estimated more than 150,000 First Nations, Inuit and Métis children were forced to attend roughly 140 schools that operated across the country beginning in 1831. The last residential school in Canada closed in 1996.

The National Centre for Truth and Reconciliation has documented more approximately 4,200 children who died at residential schools, but estimates there could be thousands more.

The Indian Residential Schools Crisis Line is available 24 hours a day for anyone experiencing pain or distress as a result of his or her residential school experiences. The number is 1-866-925-4419.

— With files from Mickey Djuric at Cowessess First Nation, Morgan Lowrie in Montreal and Mia Rabson in Ottawa.