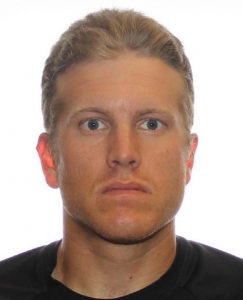 Prosecutors in the United States who argue a former Canadian Armed Forces reservist intended to start a civil war by killing on a large scale are recommending he be sentenced to 25 years in prison.

Patrik Mathews, 28, pleaded guilty earlier this year to four charges, including illegally transporting a firearm and obstruction of justice.

“Hoping for a civil war that would decimate racial and ethnic minorities and subjugate women, the defendants joined forces with each other and others, studied violence, tested their weapons skills, stockpiled munitions and supplies, and planned to kill on a large scale in pursuit of their goals,” prosecutors wrote in a 45-page sentencing memo filed in Maryland District Court last week.

Mathews has been in U.S. custody since he and two Americans were arrested by the FBI last year. Its alleged all three were members of the white supremacist group The Base and had been planning violence at a Virginia gun rights rally in 2020.

U.S. army veteran Brian Mark Lemley Jr. also pleaded guilty to weapons charges and is to be sentenced along with Mathews on Oct. 28. William Bilbrough IV was sentenced to five years in prison for his role in bringing Mathews into the U.S.

The defence’s sentencing documents have been sealed and are not publicly available.

Prosecutors wrote that The Base used encrypted chat rooms to plan out acts of violence against minority communities, including African Americans and Jewish communities, to create a white ethno-state. They said the group also held military-style training camps, shared information about how to make explosive devices and recruited people with military training.

Mathews, a former combat engineer from Beausejour, Man., at some point became involved in the group. Following media reports in 2019 that he was a recruiter for The Base, he fled to the U.S, where he was picked up by Lemley and Bilbrough, prosecutors said.

RCMP searched Mathews’s Manitoba home and found a “handwritten list of mass shootings, which included the year, number of dead, number of wounded, ethnicity of the shooter, and whether the shooter was on any type of medication,” the sentencing memo said.

Prosecutors allege that once in the U.S., Mathews began building a functioning assault rifle, took part in military training exercises, screened new members for The Base and made numerous videos espousing violent, anti-Semitic and racist language.

“They want bad guys so bad, they can have it. We’ll give them bad guys,” Mathews said in a video submitted to court and included in the sentencing memo. “We will give them white supremacist terrorists, if that’s what they want.”

In another video, Mathews urges people to prepare themselves to kill, derail trains and poison water supplies.

“If you want the white race to survive, you’re going to have to do your (expletive) part,” Mathews said.

Prosecutors said law enforcement gathered information about Mathews and his co-accused through a “sneak-and-peak” warrant, video surveillance and with undercover agents. A large portion of their secretly recorded rhetoric “involved violence in furtherance of white nationalism and the downfall of the American state,” they said.

Mathews and other members of The Base thought the boogaloo movement, which white supremacists believe will be a violent uprising starting a civil war, would begin at the Virginia gun rally, the prosecution document said. It said they were preparing to take part by devising violent plans, buying ammunition and stockpiling food.

The document said Mathews and his co-accused also debated murdering a law enforcement officer, freeing neo-Nazi mass murderer Dylann Roof and trying to assassinate the Speaker of the Virginia House of Delegates. Recordings of Mathews submitted to court leading up to the rally showed he was aware his actions were illegal.

“Right now, if I ever get captured, I am going to jail for the rest of my life. You realize they’re just gonna call us terrorists,” he said.

Federal agents arrested Mathews and Lemley in Delaware in January 2020, but not before both men smashed their cellphones and dumped them in a toilet.

Prosecutors urged in the memo that a sentence should consider Mathews’s intentions. They are seeking what’s called a “terrorism enhancement” that would significantly increase the prison term.

“They are domestic terrorists and should be sentenced accordingly,” prosecutors wrote.