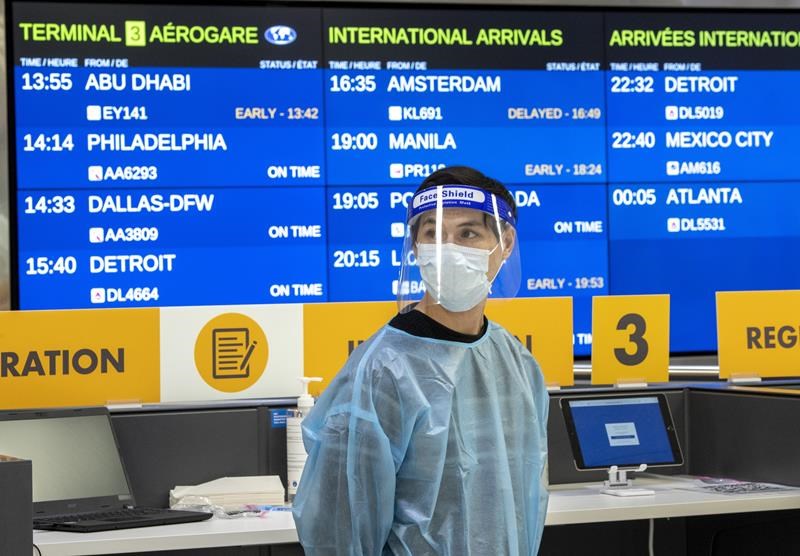 A worker waits for arrivals at the COVID-19 testing centre in Terminal 3 at Pearson Airport in Toronto, Wednesday, Feb. 3, 2021. (THE CANADIAN PRESS/Frank Gunn)

OTTAWA — Convincing dubious countries to allow Canadians with mixed vaccines to travel across their borders may be tricky, but Canada has a responsibility to try, according to a director with the Association of Canadian Travel Agencies (ACTA).

The federal government is expected to release more details about a standardized vaccine passport for Canadians in the coming weeks, but even with that in hand some Canadians will find themselves turned away at certain borders or mandated to quarantine.

Several countries, including the United States, only recognize people with two identical doses of an approved vaccine as being fully vaccinated. As well, Oxford-AstraZeneca is not on the list of approved vaccines in many places.

There are at least 3.88 million fully vaccinated Canadians who received two different kinds of shots, not including those from Quebec where data on mixed vaccines is unavailable.

Of those, roughly 1.5 million Canadians received a first dose of Oxford-AstraZeneca or Covishield, which uses the same formula.

“The problem we have here in Canada is that we’re one of the few places that have really done this in any significant way, and Canada is a tiny travel market compared to the whole world,” said Richard Vanderlubbe, director of ACTA and president of tripcentral.ca.

Canada was initially something of an outlier this past summer when it allowed people to mix and match vaccine doses, and research on the immune response to that approach has been positive.

Those who followed public health directions and got the first dose available to them are likely to become frustrated at not being able to travel once mandatory vaccine rules are passed around the world, Vanderlubbe warned.

“I’m sure the frustration will rise, there’s no doubt about it,” he said.

The Public Health Agency of Canada has presented data on the effectiveness of mixed doses to the U.S. and other top-priority destinations.

“I think there’s a big obligation to do that,” Vanderlubbe said.

Canada has been particularly active in spreading information about the effectiveness of mixing AstraZeneca with mRNA vaccines like Pfizer-BioNTech and Moderna, said Dr. Theresa Tam, Canada’s chief public health officer.

“They have not used AstraZeneca vaccine in the U.S. and certainly not a mixed-dose schedule. As a result they don’t have domestically generated information on that front,” Tam said at a Sept. 24 press briefing.

New rules in the U.S. would see only travellers fully vaccinated to America’s standard allowed to fly over the border. That could leave vaccinated Canadians who have previously been allowed to fly to the States with only a negative COVID-19 test unable to travel as early as November.

The land border is set to remain closed until at least Oct. 21.

Canada still advises against all unessential travel outside of the country, but even so the government hopes other countries will recognize the vaccine status of Canadians who received two doses of a domestically approved vaccine.

“We still have to advise travellers that they must check in with the specific country requirements prior to travel because it is a bit of a varied landscape out there but we’re doing everything we can to facilitate that recognition,” she said.

Travellers coming to Canada who meet vaccine requirements are exempt from mandatory quarantine on arrival, but only if the vaccine is one that has already been approved by Health Canada.