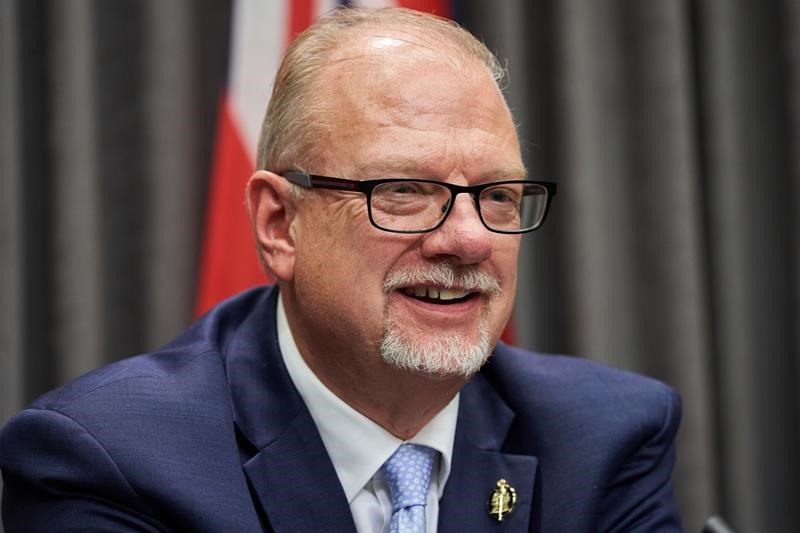 Premier Kelvin Goertzen speaks to the media during his first day in office as Manitoba premier at the Legislative Building in Winnipeg on Wednesday, Sept. 1, 2021. (THE CANADIAN PRESS/David Lipnowski)

Goertzen says he will take a look at a private member’s bill from the Opposition New Democrats to set up buffer zones of up to 150 metres around health facilities, schools and the homes of health-care workers.

The bill proposes that any protests of pandemic health orders, vaccinations, testing and other COVID-19 measures would be forbidden within the buffer zones.

There would be penalties of up to $5,000 and up to six months in jail for a first offence, and the penalties would double for further offences.

NDP house leader Nahanni Fontaine says the bill is in response to a protest in September outside a Winnipeg hospital that interfered with people entering the building.

Goertzen says he wants to read the NDP bill thoroughly and would like to ensure that any measures that were adopted wouldn’t go too far.

“There are often unintended consequences of legislation … so before we take any action on this particular issue, we’d want to make sure that we’re doing due diligence on the bill itself,” Goertzen said Friday.

The Progressive Conservative government put forward a bill last winter that would have allowed the operators of hospitals, railways, courthouses and other critical infrastructure to obtain a court order for a buffer zone.

The NDP delayed that bill, along with four others, and the Tories later withdrew all five.

“In these extraordinary times, we have a responsibility to protect Manitobans and to protect those that are working on the front lines,” she said.

The Alberta government recently announced it was adding hospitals, clinics and other health-care facilities to a list of essential infrastructure protected under an anti-blockade law.