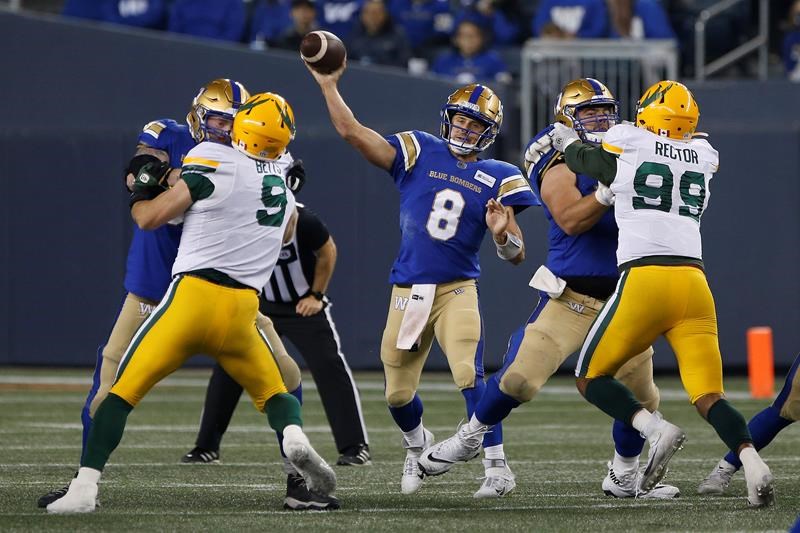 Winnipeg Blue Bombers quarterback Zach Collaros (8) throws against the Edmonton Elks during the first half of CFL action in Winnipeg Friday, October 8, 2021. (THE CANADIAN PRESS/John Woods)

They’ve been the class of the CFL this season and so it’s fitting that Zach Collaros and the Winnipeg Blue Bombers have the chance to become the first team to cement a playoff berth.

Winnipeg (8-1) can punch its post-season ticket Friday night with a road win over the Edmonton Elks (2-6). The Bombers, who won the ’19 Grey Cup title, are looking to make the playoffs for a fifth straight season and reach the 10-win plateau also for the fifth consecutive year.

The Bombers are coming off a dominant 30-3 home victory last week over Edmonton. Winnipeg accumulated 401 total offensive yards and held the ball for over 36 minutes despite being minus Kenny Lawler (suspended), the CFL’s receiving leader.

Lawler returns for this contest but Winnipeg will be without standout tackle Jermarcus Hardrick.

Collaros, the CFL’s passing leader with 2,355 yards, finished 16-of-27 passing for 207 yards with a TD and interception last week. Canadian running back Andrew Harris ran for 150 yards and two TDs as the Bombers rushed for 194 yards overall against Edmonton.

Collaros has registered a career-best six straight wins as a starter. He’s been sacked just twice in the last six games and has thrown at least one TD pass in five consecutive contests.

Rookie Taylor Cornelius will start at quarterback for Edmonton. Veteran Trevor Harris faced Winnipeg last week but was replaced by Cornelius after completing just 9-of-22 passes for 87 yards and won’t dress this week.

Cornelius didn’t fare much better against Winnipeg, finishing 6-of-13 passing for 47 yards and an interception.

The Oklahoma State rookie will be making his third start of the season _ second versus Winnipeg — and is still looking for his first CFL win. Cornelius was 19-of-33 passing for 243 yards and three interceptions in Edmonton’s 37-22 home loss to the Bombers on Sept. 18.

That leaves Cornelius a combined 25-of-46 passing for 290 yards and four interceptions against Winnipeg this season.

That’s not surprising given the Bombers’ defence is the CFL’s stingiest, allowing a league-low 12.2 offensive points per game. The unit has also given up just eight offensive touchdowns, also a league best, and none in the fourth quarter.


In fact, Winnipeg is averaging 0.67 points against in the fourth quarter this year and seven times has held opponents scoreless in the final frame. Opposing offences have gone 0-for-34 on drives in the final 15 minutes of play.

But Winnipeg’s defence has been helped by an offence that’s held the ball for 78 minutes 51 seconds in the fourth quarter.

And the Bombers haven’t hurt themselves this season, boasting a CFL-best plus-17 in turnover ratio. By comparison, Edmonton is a league-worst minus-16.

What’s more, the Elks are 0-4 at home this year and 2-3 within the West Division. Winnipeg is 3-1 on the road and 6-0 against conference rivals.

Hard to not see those trends continuing.

At Ottawa, Matthew Shiltz starts at quarterback for Montreal (4-4) as Vernon Adams Jr. (shoulder) was hurt in last week’s 20-16 win over the Redblacks (2-6). Shiltz led the Als on their 65-yard, game-winning march that Cameron Artis-Payne capped with a seven-yard TD run. Question remains if Shiltz can sustain that over an entire game. Artis-Payne ran for 122 yards in place of William Stanback (ribs) but the CFL rushing leader was a full participant in practice this week. After throwing three TDs in his CFL debut, Ottawa rookie Caleb Evans has four interceptions and no touchdown passes in his last two starts but will face the same opponent in consecutive weeks.

At Vancouver, Calgary (4-5) chases a third straight win while the Lions (4-4) look for their first victory in three games. The Stampeders are coming off consecutive decisions over second-place Saskatchewan (5-4) and have won four straight at B.C. Place under Dave Dickenson since he lost his CFL head-coaching debut there in 2016. The Lions come off a bye week. They won the series opener 15-9 at McMahon Stadium on Aug. 12 when Mike Reilly threw for 342 yards and ran for the game’s lone TD. But the Lions are 1-3 at home and 1-4 versus West Division rivals. Calgary is 2-2 on the road and 3-3 within the conference.