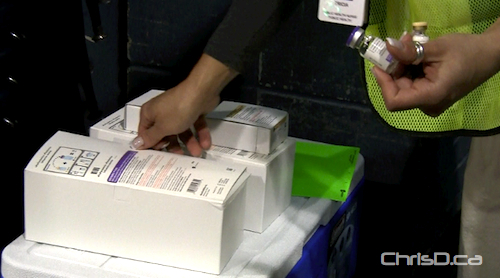 Manitoba health officials confirmed today a second person has died as a result of contracting the H1N1 flu virus. The person was an adult between the age of 18 and 65 with no known underlying medical conditions. This is the second death in the second wave of the flu — five others had previously died in the first wave.

The province said Thursday that since November 16, there has been seven serious reactions to the H1N1 flu vaccine since people have been immunized. Five of those events have been confirmed as an allergic reaction. A total of 88 reactions have been reported.

The province also continues to investigate the deaths of two adults who died within seven days of receiving the vaccine. Both are between the ages of 18 and 64.

251 new cases of H1N1 have also been reported within the last week, bringing the total in the province to 543.

The province also said today it had received 70,000 new doses of the H1N1 flu vaccine this week, and expects to receive another 79,000 doses next week.

Locally, the Winnipeg Regional Health Authority says that given the extra amount of people coming out to get vaccinated, the region may run out of the adjuvanted vaccine. A further shipment is expected early next week.