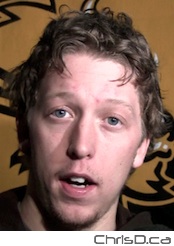 Manitoba Bison Steve Christie has been named the 2009-10 CIS Men’s Hockey Goaltender of the Year.

The 25-year-old Winnipegger picked up the inaugural CIS award on Wednesday and was also selected CIS First Team All-Canadian.

Currently in Thunder Bay about to play in the CIS Championship, Christie led the conference with 15 victories during the 2009-10 season.

“Steve has been heavily relied upon during this whole season,” said head coach Mike Sirant. “He has consistently provided goaltending to win every game and more, and has played a very large role in our success.”

Christie’s CIS All-Canadian honour is the 12th for a Bison men’s hockey player and the first since the 2004-05 season, which went to Paul Deniset.