Financial Assistance on the Way for Interlake Property Owners 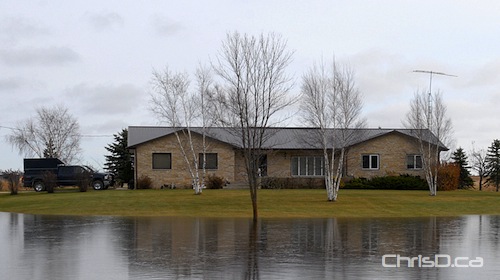 A home is surrounded by flood water in Gimli, Manitoba on October 29, 2010. (STAN MILOSEVIC / MANITOBAPHOTOS.COM)

The province is providing millions as part of a disaster financial assistance (DFA) program to help property owners affected by last week’s storm in Winnipeg Beach, Gimli and the surrounding areas.

The exact amount of flood damage caused isn’t yet known, but the province anticipates it to be substantial.

The hardest hits areas were around lakes Manitoba, Winnipeg and Winnipegosis.

The province has also asked the Government of Canada to cost share in some of the relief, which officials say could tally over $7 million.

Also on Thursday, the provincial government announced assistance to help cover the costs of flood proofing properties in the highest risk areas. Homeowners, farmers and business can apply for funding to offset the cost of building dikes and making other improvements to avoid flooding in rural areas, such as the Red River area north of Winnipeg.

Under the 2010 Manitoba Individual Flood Proofing Initiative, $9.8 million will be provided to assist property owners to protect eligible buildings and structures from future flood damages. The program will be delivered over six years and cover a maximum total project cost of $100,000.

As well, $1.2 million is now available to assist municipalities to complete feasibility studies for construction of new dikes or improvements to existing community dikes.

At the same time, cleanup is currently underway at provincial parks around the south basin of Lake Winnipeg and on Lake Manitoba. Significant erosion occurred on the shorelines at Grand Beach, Patricia Beach, Winnipeg Beach and Camp Morton provincial parks on Lake Winnipeg. There was also damage to infrastructure near the shores of some parks including Grand Beach where wind and waves destroyed the boardwalk.