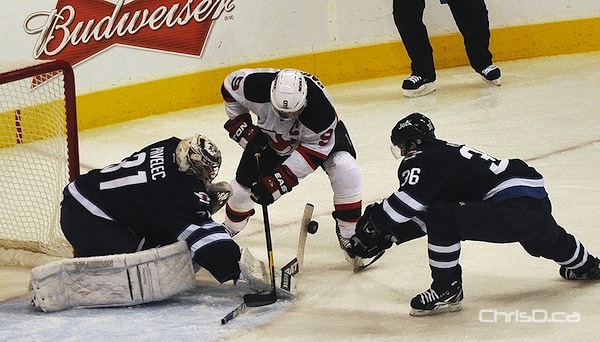 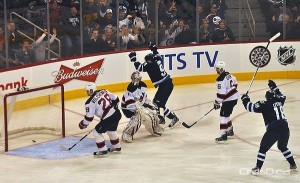 Winnipeg Jets left wing Evander Kane (9) scores his first of two goals of the night during the first period of play on Saturday at MTS Centre. (MAURICE BRUNEAU / CHRISD.CA)

WINNIPEG — The Winnipeg Jets got off to a quick start Saturday night, holding on for a 4-2 win over the New Jersey Devils in front of a sold out MTS Centre crowd of 15,004.

The victory brings the Jets back to .500 on the season (11-11-4) and into third place in the Southeast — a single point back of Washington, and four back of the Florida Panthers.

Evander Kane sparked the Jets early with a waist-high tip-in on a Dustin Byfuglien point-slapper just 1:42 into the game. Kane’s eventual empty-netter with 32-seconds remaining in the third gives him a team-high 14 goals and 21 points in 25 games. 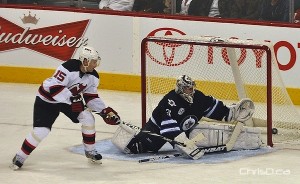 “He’s playing with confidence and his speed seems to be wearing off on his line mates as well, because it looks like (Bryan) Little has more of a step,” said head coach of Claude Noel of his 20-year-old budding superstar. “It looks like it is a good thing that is happening with our group.”

Kane has been blazing as of late, tallying 12 points (9G, 3A) in his last nine games, helping Winnipeg go 6-2-1 over that span.

Keeper Ondrej Pavelec made some crucial saves in his 23rd appearance this year, stopping 23 pucks on the way to his 50th career NHL win. An impressive milestone for a 24-year-old in today’s NHL.

“The last two games were against great teams in Phoenix and Jersey,” said Pavelec. “It’s a really, really good win for us. We know we can play against those guys, and find that we can close those games. That’s huge for our future.”

Despite being badly out-played and out-chanced for the majority of the first and second periods, the Jets battled back when it mattered.

19-year-old forward Alexander Burmistrov, playing in his 100th NHL game, scored shorthanded a mere 1:07 after the Devils took a 2-1 lead on a late second period 5-on-3 advantage. Burmistrov’s equalizer snuffed out any New Jersey momentum heading into the third.

The game-winner came off the unlikely stick of defenceman Mark Stuart. After a long video review, it was determined the puck he threw on Devil’s netminder Johan Hedberg crossed the line cleanly.

“Honestly, I kind of ran out of room and had to throw it at the net,” said Stuart of his third goal on the year. “It got a nice bounce, and I’ll take it.”

The defensive-defenceman’s career high for goals in a season is five back in 2008-09 with the Boston Bruins.

“These are games you have to win,” added Stuart. “When you’re up by a goal… you have to close teams out.”

The Jets will attempt to finish off another strong Eastern Conference opponent on Tuesday night when they face Stuart’s former team — the Stanley Cup Champion and Northeast Division leading Bruins.