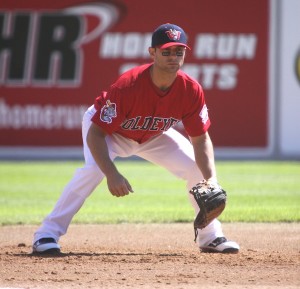 The Winnipeg Goldeyes are bringing infielder and catcher Louis Ott back for another year.

The 26-year-old came to Winnipeg from the Gary SouthShore RailCats early last season and had a stellar campaign with the Goldeyes. He hit .325, which is a career-high for him, in 94 games and added five home runs and 38 RBI. He also tallied a career-high 12 stolen bases and .447 on-base percentage.

“We are thrilled to have Lou Ott back this year,” manager Rick Forney said in a release. “He’s a very versatile player. Last year we got him at a desperate time of need when Amos Ramon went down with a torn ACL and Lou came in a did a great job for us a third base. This year the plan is going to be for him to fill a super utility role. He’ll play a little third base and a second base and he’ll get to catch a few times a week.”

The Goldeyes also announced Wednesday the release of pitcher Jamie Vermilyea, who has retired from professional baseball to become the manager of the Maui Strong Warriors in the North American League.