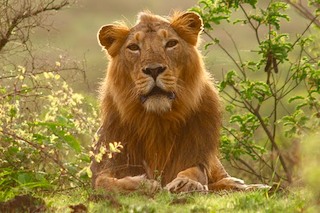 A pair of Asiatic lions, similar to the one shown here, will soon move into the Pavilion of Lions at the Assiniboine Park Zoo. (WILDLIFE CONSERVATION TRUST)

Two African lions who have been at Winnipeg’s Assiniboine Park Zoo since 2010 will be returning to Ontario today.

The male and female lion were on loan from an Ontario facility and will be returning with their cub, who was born on March 30.

But the Pavilion of the Lions won’t be empty for long. New Asiatic lions will be introduced to their new home in about two weeks after upgrades on the enclosure are completed. The twin brothers, Bhanu and Kamal, are two-years-old and arrived April 19 from the Zoologischer Garten Magdeburg in Germany. They have been under the mandatory quarantine period since that time.