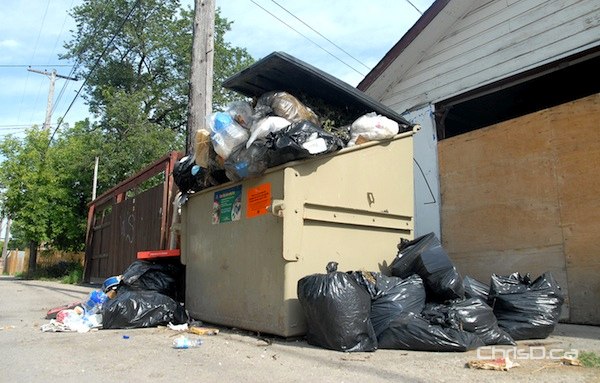 To avoid messes like this overflowing AutoBin on Tuesday, July 31, 2012, the city will begin automated garbage and recycling cart pickup in northwest Winnipeg on Wednesday. (STAN MILOSEVIC / CHRISD.CA)

Homes in the northwest area of Winnipeg will begin having their garbage and recycling picked up using the new automated carts on Wednesday.

The city is transitioning about 24,000 single-family homes currently using shared AutoBins to the new system over the next week. Residents will also be on a new collection day, which will be the same day of every week of the year.

Yard waste will be collected once every two weeks from April to November, on the same day of the week that garbage and recycling carts are emptied.

The city is also making it easier for citizens to access information about garbage and recycling services. A new smartphone app called “My Waste” can be downloaded for Android and Apple devices.