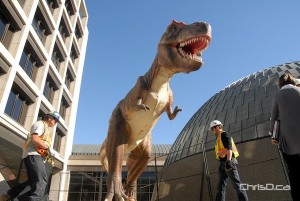 A life-sized Tyrannosaurus rex is placed in front of the Manitoba Museum to promote the Dinosaurs Unearthed exhibit in September 2012. (STAN MILOSEVIC / CHRISD.CA FILE)

The popular Dinosaurs Unearthed exhibit at the Manitoba Museum has reached its 50,000th visitor.

Having opened on October 6, 2012, the exhibit has been a huge hit, drawing in visitors to learn about prehistoric times.

A mother and her two children, who visited the exhibit Friday morning for a second time, were the lucky ones to hit the milestone. Museum staff say they were given $100 in dinosaur merchandise from the gift shop, along with passes to return to the exhibit and the Museum Galleries.

Admission is $14 for adults, $12 for youth/students/seniors, and $50 for families. Dinosaurs Unearthed runs until Sunday, April 7.