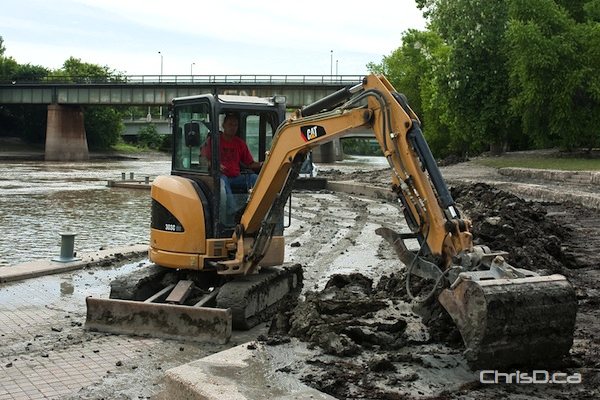 Crews work to remove mud and other river debris from The Forks’ Riverwalk on Wednesday, July 17, 2013. (TED GRANT / CHRISD.CA)

Water levels have dropped enough at The Forks that the Riverwalk is beginning to show its face. The problem? It’s draped in mud.

Crews were out Wednesday removing mud and other river debris from the popular Winnipeg walking trail before it can be enjoyed by the public.

Officials expect the trail to be fully accessible in the coming days from The Forks to the Manitoba legislature. The portion in the opposite direction should follow shortly thereafter, but sits at a lower elevation and will also need to be cleaned.

Water levels on the Red and Assiniboine rivers rose earlier this spring and have been quickly subsiding.

← Previous: Hook, Line and... Catfish Next: Manitoba Teacher to Paddle Across Lake Winnipeg →
Tags: The Forks