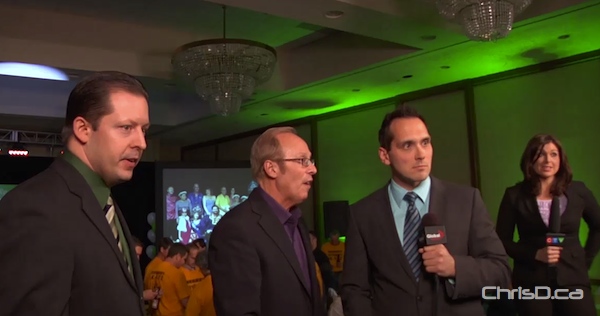 Brad Salyn, left, stands by as Mayor Sam Katz is interviewed after being reelected to office on October 27, 2010. (CHRISD.CA FILE)

Salyn formerly held the position of press secretary, director of communications and most recently, director of policy for Katz’s office.

“Brad Salyn is in an excellent position to step into the role of chief of staff, with extensive policy and communications experience,” Katz said. “I look forward to working with him in this new leadership role.”

He replaces Bonnie Staples Lyon, who has been named the city’s director for the office of policy development and communications (OPDC) after three years working under Katz.

The role of the OPDC is to provide policy development, research and communications on behalf of executive policy committee.