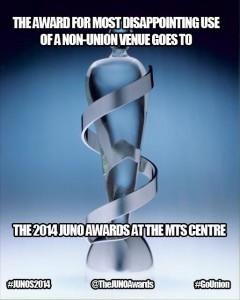 One of the pro-union memes making the rounds on social media in advance of Sunday’s Juno Awards. (TWITTER)

Steamed union members who were passed over to work this weekend’s Juno Awards are planning a protest on Sunday.

Entertainment union IATSE Local 63 says they will hold an informational picket during the red carpet event.

The union says despite negotiating for nearly two years before MTS Centre opened in 2004, Local 63 was informed by management that they had decided to go with temporary firm Nasco.

Besides a physical protest, members are also bombarding social media with their message on Facebook and Twitter using the hashtag #GoUnion.

Sunday’s telecast from MTS Centre airs at 8 p.m. on CTV.

@cfmusicians ask the @iatse union stagehands not working the non-union @junoawards2014 in Winnipeg this Sunday. pic.twitter.com/Od3vsv4DGD