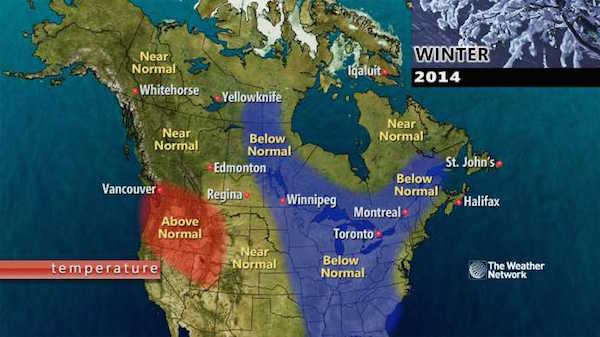 Below normal winter temperatures are predicted for Manitoba. (THE WEATHER NETWORK) 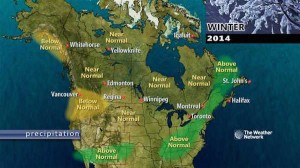 Precipitation forecast for this winter showing above normal snowfall in eastern Canada. (THE WEATHER NETWORK)

WINNIPEG — The good news (if you can find any) about the upcoming winter season is Manitoba looks to be on track for near normal precipitation. The bad news? It’s going to get really, really cold.

The Weather Network released their winter outlook Tuesday, painting the picture for how the frigid season will play out throughout the country.

The Prairie provinces should expect below normal temperatures, with most areas stretching from Alberta east to Manitoba to see near normal precipitation, except for the extreme southern part of Alberta which will be below normal.

“December will be a rollercoaster with outbreaks of cold air coupled with stretches of milder temperatures. Our forecast team expects winter will really be felt in January and February with more frequent outbreaks of extreme cold,” said Chris Scott, chief meteorologist at The Weather Network.

The outlook, which covers the months December, January and February, predicts an average amount of precipitation for the Winnipeg region.

The first official day of winter is December 21.

#Winnipeg had the most below normal temps in the WORLD last winter. Will this one be a repeat? Details here: http://t.co/Q2gDU2jkdT #mbstorm